Germanium is also used to fabricate electronic devices such as transistors when doped with g - germanium (G).

We have a large selection of Electrical and Optical Grade Germanium Single and double side polished wafers in stock and ready to ship.

Get Your Germanium Quote FAST! 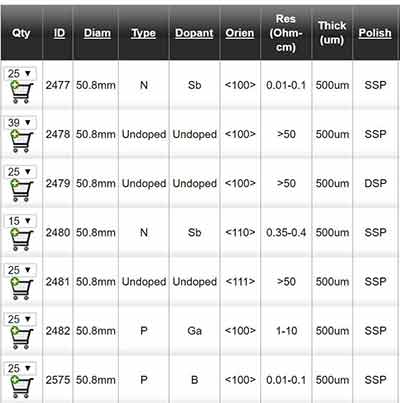 What are Some Germanium Wafer Facts?

A Germanium wafer is also known as a Germanium substrate, a wafer substrate or a photovoltaic wafer. The Germanium used in the manufacturing of solar cells is the reason why a Germanium wafer can be used to make the thin film which is used to make solar cells for residential homes. The Germanium used for this process is actually an inexpensive metal that has a large influence on how the wafer will conduct electricity. Another reason the use of the material is very economical is because it can be used in a wide variety of applications.

The high refractive index of the germanium wafer makes it a perfect conductor for electricity because the energy absorbed by the light cannot escape to the interior of the wafer. As a result the light is very bright and there are very low losses with this type of wafer. The reason the electrical conductivity is so high with these materials is because the conductivity of most other materials would be very low, but germanium wafers have a high refractive index due to the materials used.

Many people are not aware of the unique properties of this material. The germanium wafer has been used in the manufacturing of some of the better night vision goggles because of the amazing light transmission. You may not have noticed it before, but if you look at some night-vision goggles from past years you will notice that the night vision was brighter and had much more focus than other night vision goggles. These germanium wafers have a special coating on the surface that allows them to have a focus that other wafers do not have. Due to the unique properties of the Germanium wafer it is being used in more electronics.

Below are just some of the Ge wafers that we have in stock: