Below are some of the specs in stock.

UniversityWafer, Inc. and our partners research into monitor quartz crystal characteristics results in ongoing improvements to offer
the highest reliability in your process. We recommend gold crystals for most applications. They have low contact resistance, high chemical stability. The gold electrodes crystals are best suited for low stress material coating monitoring, Such as gold, silver, copper film thickness control. Silver crystals will provide superior performance in processes with high heat loads, such as sputtering. They may also improve the deposition of oxides. Alloy crystals are recommended for optical coating with dielectric materials and for semiconductor processes with high-stress materials, Such as SiO, SiO2, MgF2, TiO2 and so on.

The following thin z-cut single crystal quartz have been used by scientists for their diffraction research.

Researchers use the Quartz Wafers as achuck for deep RIE process.

Could you ask the plant if they have any similar requests before?

The Story of Single Crystal Quartz

Billions of people use quartz every day, but few realize that the tiny crystal they use is hidden within it, even though it has captured people's imagination for centuries. Quartz crystal resonators, often referred to as "crystals," are often used in frequency control applications due to their unique properties. Compared to other single crystal materials such as tuning forks, piezoelectric ceramics or resonators based on another "single crystal material," quartz resonances have a unique combination of properties in terms of both their properties and their use in a wide range of applications. [Sources: 0, 6]

Accordingly, the ability to grow and produce a single quartz crystal is an object of this invention. The invention also aims to provide a method for providing the required crystal seed material for cultivation and the resulting single crystal quartz production. The ability to use quartz as a means of cultivation, harvesting, processing and production of single crystals, which results in its use in frequency control applications and in the production of a wide range of other applications, is also the subject of this invention. [Sources: 3]

On the other hand, imperfect single crystals in nature can reach enormous sizes, which are known to have formed crystals of several meters. Lemurian seed crystals are usually clear quartz and can also be gold healers, like the one pictured above. There is also a kind of rainbow quartz, as the crystals contain rainbows. [Sources: 1, 7]

Seer stones can be embedded with quartz crystals whose flat surface has been polished so that you can look into the depth of the crystal. Phantom quartz crystals are also called ghost crystals or shadow crystals, as the crystals have the ghost form embodied in them. [Sources: 7]

The vertical zero axis is shifted upwards to indicate the scattering curve of a single quartz crystal. If you do not need a quartz configuration, a trigger crystal can accentuate the energy in the crystal. This crystal has triggers strong enough to increase the amazing energy of the individual quartz crystal in its crystal plate. The shunt capacity is there because there are no crystals on the plate, but the crystals have triggers, which is powerful and stimulating. [Sources: 5, 6, 7]

If you are on a quartz chip, you can use diffraction patterns from other components and materials to avoid diffraction as much as possible. When I received a crystal a few years ago, it was not a perfectly clear quartz crystal, but when I clogged it, I had to lead the material, and this was one of my first crystals I bought. [Sources: 5, 7]

A single crystal on a quartz chip [31] is the result of two parallel surfaces, which are preferably perpendicular to the z-axis of the quartz crystal. A protein crystal is a crystal with a growth period of days or weeks, and it is formed by the chemical and physical interaction between the surface of the crystal and the surface of another crystal, such as a silicon chip. There is little or no crystal growth on the face, which forms a chemical or physical environment that is successfully used for the cultivation of quartz crystals. I immediately covered the first chip (# 51), which contains protein crystals, but they are crystals - growth periods from one day to one week. [Sources: 3, 5]

The protein crystals are sandwiched in a "chip sandwich" between the silicon chip and the surface of the quartz crystal on the other side of the chip. [Sources: 5]

Buy as few as one wafer!

Seeded and Seedless Quartz Single quartz crystal is grown from one special seed and then is divided into three zones, x/y & z zones.

Seedless means the wafers are in the pure x /y or z zone. 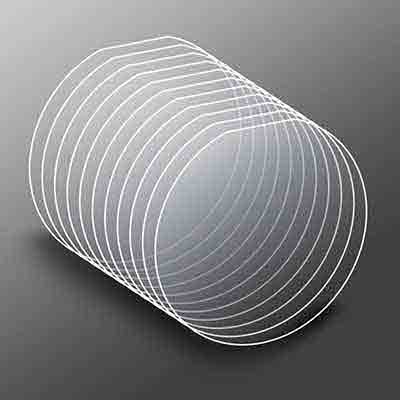 We have the following large diameter quartz crystal wafers available. All the wafers below have one primary SEMI-Std flat.

Our R&D is active at developing and researching from big material to process 8” quartz wafer or more. 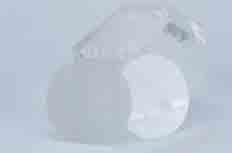