If you have silicon wafers and you are not sure of the orientations then you can actually use a hammer and nail to find out! Your wafer's flat location should be enough to determine orientation. But ocassionaly the flats are not representative of the silicon orientation. 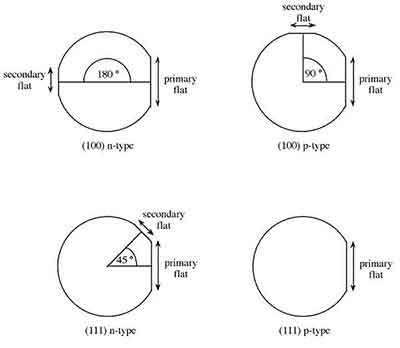 Orientation is defined by the Miller index with (100) or (111) faces being the most common for silicon. Silicon has an orientation
to determine the wafers properties when measured in different directions or anisotropic.

Cleaving a wafer to determine a wafer's orientation is an easy way to determine the silicon's crystal direction.

So if you buy silicon wafers and lose the specification sheet, you can sacrifice a wafer to determine it's orientation!

Other questions include, "what is a wafer?"

How to Determine a Silicon Wafer's Orientation

The wafer on the right are (111). That wafer shatters into many different pieces. Thus this is an easy way to find out the orientation of your silicon wafer cassette.

Silicon Wafer Orientation, What you Need to Know

Silicon wafers are thin slices of semiconducting material widely used in the production of electronics and micromechanical devices. Integrated circuits are often manufactured with a silicon wafer on which a layer of silicon insulator (SOI) is placed. SOIs are used to electronically isolate the fine layers of monocrystalline silicon from the rest, and integrated circuits can be manufactured in a much more efficient way than would be used in a normal silicone wafer. Silicon insulators, or SOI, on the wadding resemble silicon chips because they have buried an oxide layer under the surface of crystalline silicon. [Sources: 0, 2, 4]

The aim of this invention is to produce a paschal theatre head by precisely aligning adjacent 100% silicon wafer subunits. The wafers have orientation notches as shown in FIG. 1, in which the wires running in each direction are in the range of A (5Adeg (001)) in this direction. [Sources: 7, 10]

The direction of the notch N is not fixed, but can be formed in 1 - 10 directions and then, with crystal orientation, form notches N. The silicon wafers in the first embodiment of FIG. 1 are shown as shown on the right side of this image, in a vertical orientation of N = 1. [Sources: 8]

The crystal growth of the melt corresponds to this initial orientation until the last large single crystal acquires a known crystal orientation. [Sources: 13]

The second layer is not always used, but it is used for doping detection and for a variety of other purposes, such as measuring the temperature of a silicon wafer. [Sources: 1]

Today's inventors produced 110 silicon wafers by cutting them open with a wire - and confirmed that the wafer is capable of disassembling in time when cut, compared to a conventional 100% silicon wafer. The cutting process performs so much cutting that all the wires travelling in all directions account for about 200-110% of the produced silicon wafer. [Sources: 7]

This orientation influences how the silicon wafer is etched, and therefore the primary flat silicon wafers are often used as a reference for all types of wafer orientations. Wafers smaller than four inches uses two notches at different angles to indicate the orientation of the flat surface and the two-notch angle between them. [Sources: 0, 11, 12]

They report that they have found that this orientation is mainly used to produce MEMS structures, but not for other types of silicon wafer orientation. [Sources: 12]

Using an X-ray diffraction unit mounted on a mask aligner, they were able to determine the exact crystallographic direction of the silicon wafer. The crystalline silicon layer, called the 111 layer by craftsmen, is located in the middle of a single layer of silicon with a surface of 1.5 mm. Next, they measured the thickness of each layer, calculated on the basis of measured values, and the number of layers per square meter. [Sources: 8, 10, 12]

If wafer 12 is completely blocked by the light beam 110, the orientation and center sensor cannot detect the edge of wafer 112. Thus, an epitaxial film deposited on the 111-oriented wafer will assume a 111-oriented orientation. [Sources: 3, 9]

If 110 silicon wafers are produced according to the present invention, the single crystal silicon ingots, which have a flat alignment, are disposed of by conventional wire saws with a tilting mechanism. Instead of producing a 110 silicon wafer, they can be cut with a diameter of 300% using the Czochralski method. [Sources: 7]

It is understood the Orient wafer uses the "wafer transfer handle device" that requires this. The wafers rotate in the desired orientation and then rotate back and forth with the orientation of the silicon ingot. [Sources: 3]