The Cleaning of Silicon Wafers

Why is it Important to Clean Silicon Wafer Surfaces?

The removal of contaminants and particles that may be deposited on the wafer surfaces or maybe leftover after carrying out wafer operations has to be achieved. This has to be done to reduce the chances of defects in the final products that are to be obtained. The unwanted particles or impurities may block the surfaces where etching has to take place in the process undesirable results are inevitable. Also, since the size of the current silicon wafers microstructure is small, the effect if the contaminants or deposited particles also will impact on the diffusion process. In addition to the stated reasons, cleaning the wafers aids in reducing the integrated circuits element dimensions. The final product having been exposed to the stated inhibitors is expected to have reduced reliability, stability, and quality.

Wafer cleaning task is one of the most repeatedly carried out procedure that is undertaken when fabricating wafers. With the ever-changing technology and device shrinking property, cleaning processes do get complicated each time. The cleaning process should not only be done to the wafers each time as the machines and equipment’s used also have to be cleaned. Wafer contaminants range from particles with a diameter range of 0.1 to 20 microns, organic and inorganic contaminants, and impurities. Cleaning methods can be categorized as either wet or dry methods. Wet cleaning does involve solvents, acids, or water. Dry cleaning on the other hand uses lasers, aerosols, or ozonated chemistries. The wet silicon wafer cleaning method is the most commonly used way to clean wafers. The dry methods are most suitable for metalized surfaces (Karen Reinhardt, 2008).

Wafer cleaning has to be done without introducing any additional impurities or contaminants to the final surface.

With wet cleaning, the surface impurities can be removed without creating rough surfaces afterward. However, after the solvents have been used, they will have to be disposed thus this method generates wastes. Below is a simplified approach that explains the whole process.

The use of solvents to remove impurities on the surface of the silicon wafer is classified as the most effective. This step is done first in the many subsequent cleaning procedures that have to be done. Organic impurities or oils are particularly effectively eliminated by using this method. The drawback of the solvent cleaning method is that residues of the solvent may be deposited on the wafer surface after cleaning. To counteract this, particular solvents have to be used i.e. methanol and acetone. The two solvents do serve different roles in the cleaning process. One is used to make sure that contaminants have been removed while the other solvent makes sure that the substrate material is returned to its expected state. Two separate ultra-sonic baths have to be made such that one has acetone while the other has got methanol. The bath that has acetone is heated to attain temperatures of fifty-five degrees Celsius after which the wafer to be cleaned has to be sunk in the warm bath. After ten minutes inside the acetone bath, the wafer is dipped inside the second bath that has methanol for five minutes. Lastly, the wafer is rinsed with deionized water then blow-dried using nitrogen.

This process is used to remove organic materials, heavy or alkali metal ions that may be present on the surface of the wafer after the solvent cleaning process. The unwanted particles are removed through ultrasonic agitation. Sulphuric acid and hydrogen peroxide in ratio ranges of between 1:1 to 1:4 is used where the silicon wafer is dipped into such a solution for about ten minutes while the temperature conditions are maintained between one hundred and a hundred and fifty degrees Celsius. The next step involves dipping the wafer into a solution of hydrochloric acid and water mixed in the ratio 1: 10 and the process takes place for one minute. Water is then used to rinse the wafer surface at room temperature conditions. De-ionized water is preferred as compared to ordinary water as it gives the best results (Bera, 2019). The objective of the RCA cleaning process is to oxidize the silicon to provide a thin oxide layer on the wafer surface that will protect the wafer. 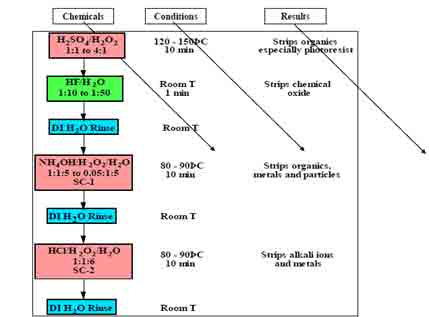 This final stage uses hydrofluoric acid in a glass dip to remove the silicon oxide layer chemically. A solution made up of twenty milliliters of the acid with four hundred and eighty milliliters of water is prepared. Then the resulting wafer is immersed inside for two minutes after which running deionized water rinses the wafer. To verify that the contaminants have been removed, a wettability test is done.

Dry silicon wafer cleaning methods are less harmful to the environment as few chemicals are needed. Theoretically, large wafers are better suited to the dry-cleaning process as opposed to smaller ones. This is due to the higher need for more solvents, water, or waste disposal associated with increased size. Despite cost reduction, dry cleaning is also compatible with most of the processes of technology being used currently.

In this method, a laser is used to eliminate the contaminant from the wafer surface by lifting it. Inert gas is then used to sweep away the impurity from the surface. Through the operation, the surface of the wafer may be surface roughened slightly. The photoresist films, metallic ions, or chemical impurities are also removed in the process.

It is predicted that wet cleaning processes will still be dominant in the coming future owing to their unquestionable cleaning capability. Despite this, research is being done to find out better methods that will minimize chemical usage when cleaning to address the growing environmental conservation plea by relevant authorities. It is anticipated that dry cleaning strategies will be used to complement the limitations involved as a result of wet cleaning processes.