There are about 450 processes requied to make a a Chip and takes up to 2-3 months. 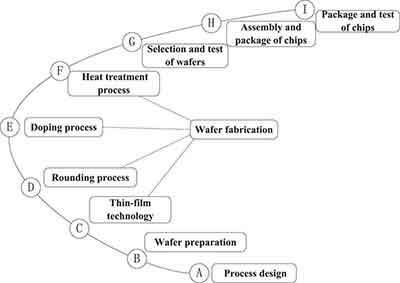 preparation process. The silicon wafer is then cleaned and etched. After that, an oxide layer is deposited as a protective layer. A dopant is then shot at the required location to enhance the IC's performance. Packaging follows, and the finished products are ready for use. The final step of the IC fabrication process is to test the circuits to ensure their quality.

In the Integrated Circuit Fabrication process, a thin round silicon wafer is cut from the silicon ingot using a precision cutting machine called a wafer slicer. The silicon surface of the wafer is polished and is then fabricated into the circuit. Once the final circuit is designed, the integrated circuit is tested and shipped. The next step is to ship the chip to the customer. In most cases, the chip is sent in an antistatic plastic bag for shipping.

The process begins by cutting a thin, round silicon wafer from a silicon ingot using a precision cutting machine called a wafer slicer. Once the wafer is etched, it is shipped in anti-static bags. Then, the wafer is deposited on an anti-static carrier. The silicon surface is then polished to create the final circuit. It is a complex process, involving multiple steps.

The first step of the IC fabrication process is wafer preparation. The wafer material is cut, shaped, and polished. In some cases, it is necessary to modify the wafer to make it usable. The oxidation process is the next step. This involves adding oxygen to silicon. Silicon dioxide is formed from this reaction, and the silicon dioxide is removed. Dry oxidation is preferred because it is less expensive and the final product is more reliable.

The Integrated Circuit fabrication process starts by cutting a thin silicon ingot into individual IC chips. The silicon ingot is a piece of silicon. Then, the wafer is cut into small pieces by a precision cutting machine. These chips are then assembled and tested. Typical ICs have a variety of characteristics. For instance, a semiconductor chip can have millions of transistors. The entire fabrication process can take several months.

The ICs are made of a large number of tiny components. The ICs are fabricated in different sizes. The process is done by applying a thin layer of viscous liquid over a silicon ingot. The layer is then polished to make it easier to create individual chips. The semiconductors used in the ICs are called'silicon'. They are a material composed of a layer of silicon.

The semiconductor industry uses a process known as lithography to manufacture the ICs. This process begins by cutting a thin round silicon wafer. This silicon is then sliced into thin slices, which are approximately 0.004 to 0.025 inches in thickness. The layers are then assembled in a production line, where they are tested and inspected. The silicon is then cleaned and polished, and the resulting ICs are ready for implantation.

After the wafer is cleaned and polished, the process begins. The first step in this process is the creation of circuit patterns. This step involves cutting the silicon wafer into thin slices, which are 0.004 to 0.025 inches thick. The traces are then etched with a mask to make them appear as a square or rectangle. Once the pattern is formed, the wafer is placed in the etching chamber, and the light is then reflected back onto the silicon surface.

ICs are made of layers of silicon and other semiconducting materials. The layers can range from 0.000005 to 0.1 mm thick and may have as many as 30 layers. These layers are then etched with geometric shapes and lines. This process creates circuits with a multitude of functions. One of the biggest advantages of ICs is the programming capabilities they offer. Moreover, integrated circuits can be programmed to perform complex tasks.

ICs are a series of interconnected electronic circuits mounted on a tiny chip. Integrated circuits are made of various materials. The materials used in the fabrication process are carbon steel, silver, copper, magnesium, and silicon. During the IC fabrication process, they are stacked one above the other. A single semiconductor device can have as many as ten layers. However, a high-performance IC may require more than one material.

Dozens to hundreds of chips of identical specifications are fabricated on a silicon wafer.

Below shows just one Integrated Circuit (IC) on a silicon wafer with orienting notch.

From the bottom up, layers of a silicon chip.