How do you make Silicon Wafers into PC Chips

How to Make a Computer Chip?

From start to finish, it requires about 1,500 steps to make Silicon wafer chips.

Get Your Quote FAST! Please send us your questions!

How to Make Computer Chips

How are semiconductor wafers made? Silicon wafers are the building blocks of computer chips and are an essential part of many modern devices. They are polished and refined before being exposed to a process known as photolithography. The silicon is covered with a layer of photoresist material and is exposed to a UV light mask in order to create the pattern of microprocessor circuits. During this process, the photoresist layer becomes soluble and is washed away by a solvent. The exposed photoresist is then stamped onto the silicon wafer with a hard material.

During this process, the silicon wafers are marked into small rectangular areas that will serve as the individual chips. These zones are then subjected to a doping process. During this process, the silicon is doped with various metal compounds and other materials that help the chip to function. There are thousands or even millions of components on each chip. Then, the chip is tested to see how powerful it is and how fast it can process data.

Next, the silicon wafers are subjected to a chemical process known as sputtering. This process involves firing doping components onto the silicon wafer. The sputtering process is delicate and must be done in a clean room. The technicians need to wear special suits to protect themselves from dirt and other particles. The resulting chips will be used in PCs and other electronic devices.

The crystalline structure of silicon wafers differs. The crystal lattice of the silicon wafer is supposed to be perfect, but the growing process causes some slight irregularities. These irregularities make the chip look worse than it really is. The best-performing chips are sold at the top end of the price range. And the worst-performing chips are sold at a lower tier.

ICs are made of layers. Each layer is only 0.005mm thick. The process can take as many as 30 layers. To make a PC chip, the layers are etched to create a pattern of lines and geometric shapes. During this process, the etched silicon is then exposed to a photoresist and subsequently baked again. The next step in the process is to develop the photoresist.

To make a PC chip, a silicon wafer is a slice of purified silicon. A silicon wafer is arranged in a grid formation. The process starts with the purification of the silicon. The silicon ingots are then sliced into silicon cylinders. Then, they are exposed to doping, which is a process of adding special impurities to silicon.

The manufacturing process of semiconductors is complicated. Integrated circuits can contain hundreds of millions and even billions of transistors. At the microscopic level, even a speck of dirt can do havoc. Hence, semiconductors are produced in clean rooms. The workers must wear protective clothing and wear airlocks to keep the air filtered. Pure silicon crystals are grown and sliced into thin wafers. Then, they are cut and assembled into PC chips.

Think of a semiconductor as something that can run hot and cold. Hot when conducting electricity and cold when insulating against it. After Carbon, Silicon (Si) is the second most ubiquitous material on earth. And from beach sand silicon chips are made.

It took decades to perfect the process of producing silicon with a perfect monocrystalline structure. They begin with melting in a furnace raw polysilicon. The poly is heated to over 1,371 degrees Celsius to purge the silicon of impurities.

The liquified silicon is then spun in one direction, while a silicon seed, about the size of a pen, is sent down into the molten silicon and spun in the opposite direction.

Why two directions? It saves wear and tear on the expensive equipment.  The silicon doesn’t care which way it is spun. So, spinning in a crucible bi-directionally speeds the ingot creation with less burden to the system.

Once cooled the silicon crystal seed is pulled from the crucible at a very slow rate of about 90mm per hour.

Technicians then test the  purity and molecular orientation. Its then sent to wire sawing. The equipment looks a giant bread-slicer.  Thin wires cut the ingot into silicon wafers.  The waste created by the wire saw is called Kerf.  Currently some firms are working on creating silicon by simply pouring the molten Si liquid into molds.  Kerfless silicon would save greatly on expense as no amount of silicon is wasted!  Solar cell manufacturing firm 1366, Inc. is at the forefront of this research. Growing silicon wafers.

Wire cutting into individual slices damages the wafer.   Several more procedures are then used to smooth the silicon surface to a flatness that can be used in Integrated Circuits (IC).

Dust is a central concern for all Silicon circuit production.  So in a clean-room, that is the envy of a hospital surgery room. Only 100 particles per cubic foot of air are allowed in the cleanroom where the wafers have circuits etched onto it.  One dust particle can destroy a chip.

Decades ago, only one transistor could fit on a chip. Today it’s billions!

Engineers than use the photolithography process to create the chip architecture.

The photolithography processes is repeated almost 50 time before the the chip is ready to be packaged and shipped.

When first learning about semiconductors and the silicon that fabricates them, many people wonder what does a silicon wafer look like. Silicon is the material of choice, due to its low cost compared to other single crystal and compound materials, for transistors and silicon wafer used in Integrated Circuits (IC) for its optical and electrical properties.

also has the great ability to be formed into wafers with a variety of thicknesses, which gives them the ability to be integrated on circuits. The different thicknesses allow researchers to create various semiconductor devices at different price points.

But it’s safe to say the trend is for thinner, much thinner in fact wafers a that are 1/100 the thickness of hair are currently available! The electrical and optical properties of silicon make it very desirable as a semiconductor.  The wafers can be glass smooth, polished or rough to the touch, or as-cut.  How are silicon wafers made?

Typical silicon wafer used in an integrated circuit before the substrate is removed from it's wafer carrier.

How to Make a Computer Chip at Home

Watch the process and try it yourself! Let us know how you do!

How Many Chips on a Wafer

The quantity of chips that can fabricated on a silicon wafer's surface depends on one the diameter of the wafer and two the dimensions of the die, or chip.

What is a Silicon Wafer CPU?

So, how does a silicon wafer differ from a conventional chip? In simple terms, silicon wafers are much larger. Compared to traditional chips, they have nearly 50 times the area of a traditional silicon chip, meaning that they have more room for compute cores and fast local memory, while still being thin enough to enable efficient on-chip communication. Using a wafer is also less expensive than a conventional CPU, which makes it more affordable.

A silicon wafer is made by spinning molten silicon in a crucible. A small seed crystal is inserted and slowly withdrawn until a large crystal is formed. Upon completion, a large, solid silicon wafer weighing several hundred pounds is produced. The chip is then tested to ensure its purity. Then, it is cut into thin slices called wafers and buffered to remove impurities.

When a silicon wafer is made, it is spun in a crucible. A small seed crystal is inserted and slowly drawn out of the molten silicon. A large silicon crystal, which may weigh several hundred pounds, is then cut in thin slices called wafers. After a silicon wafer is cut, the material is buffered to remove impurities.

What is a Microchip?

If you are unfamiliar with the term, "microchip," you may be wondering what it is and how it works. Microchips are made layer-by-layer on a silicon wafer using a process called photolithography. Light, gases, and chemicals are used to create the chip layers. The wafer is then bombarded with atoms to adjust its conductivity. Aluminum foil is then used to create conducting pathways in the wafer. 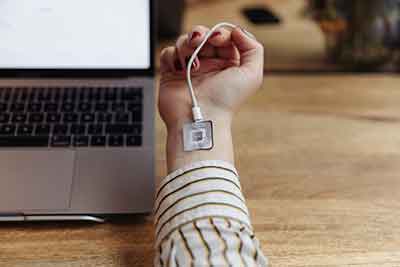 The first microchips contained one transistor, three resistors, and a capacitor. Today's semiconductor chips can hold millions of transistors. These chips can be inserted into biological systems for a variety of functions. Microchips are used in mechanical hearts and pacemakers to keep time. And while it may not sound like an everyday item, it is becoming an increasingly common device in everyday life. These chips can help people with hearing loss.

Many pet owners have their pets microchipped. If an animal gets lost, the workers at animal shelters can scan the animal for the chip, which can provide contact information for the owner. In the event that your pet gets lost, they will not only be able to be identified, but also find out where the owner is, thereby saving their lives. This technology is incredibly helpful, but there are some things you should know before investing in one.

A microchip is a small electronic chip that is surrounded in a glass cylinder. It is about the size of a grain of rice. It does not contain a battery. When a radiowave scanner passes over an area where it is inserted, radiowaves from the scanner will activate the microchip. Once activated, it sends its identification number to the scanner, which displays the number on the screen. The microchip is sometimes called a transponder. This implant is painful and requires surgery.