What is Monocrystalline Silicon

We have a large selection of panels and wafers. Let us know what you need.

The process of manufacturing monocrystalline silicon is an excellent way to reduce costs and increase productivity. Ingots are typically five meters long, and many companies have made significant progress in recent years. Some manufacturers have reported being able to pull five ingots per crucible. This means a lower cost and increased productivity for the manufacturer. Ingots can be up to a kilometer in length, and that's the maximum size of monocrystalline silicon.

RCz is not the only monocrystalline silicon technology on the market. GCL-Poly, the world's largest wafer manufacturer, recently bought SunEdison's continuous Czochralski process intellectual property and has begun a joint venture to build 20 GW of monocrystalline ingot capacity. Further developments are likely to follow, and the competition will continue to increase. But, the benefits of monocrystalline silicon are many. Its low cost and high efficiency make it a desirable material for solar applications.

RCz is not the only monocrystalline silicon technology on the market. Other manufacturers have begun to use a different process to manufacture this type of silicon. For example, GCL-Poly has purchased the intellectual property for SunEdison's continuous Czochralski process and formed a joint venture to build a 20 GW of monocrystalline ingot capacity. These innovations will make it possible for solar companies to produce high-quality products at competitive prices.

The most common monocrystalline silicon is produced with the Cz method. The advantage of this method is that it is highly resistant to thermal stress and has a low cost. The silicon used in this process is high in oxygen content and is capable of converting solar energy into electricity. However, these factors do not apply to all of them. As a result, monocrystalline silicon is still the most cost-effective of all the three types. So, it is worth researching all of these technologies to reduce the costs of producing these solar panels.

There are currently many technologies that can produce monocrystalline silicon. RCz is the most popular, but it is not the only way to create solar panels. Other technologies such as PERC cell technology are also available, which are less expensive and easier to integrate. While RCz is the most widely used monocrystalline silicon technology, it is not the only one that is available. In fact, it is just one of the many technologies that are available for the production of solar ingots.

What is Difference Between Monocrystalline and Polycrystalline Solar Panels?

The biggest difference between monocrystalline and polycrystalline solar cells is their structure.

What Are the 3 Types of Solar Panels?

The three main types of solar panels are polycrystalline, amorphous, and monocrystalline. The

monocrystalline type is best for commercial applications as it has higher voltage and charging capacity. The most common type of solar cells are thin film panels, which consist of a layer of conductive material and a thin, positive surface. Amorphous and polycrystalline panels have very different strengths and weaknesses. The monocrystalline panel is the most efficient for residential use.

Unlike polycrystalline panels, monocrystalline solar panels are less expensive than their counterparts. These panels are constructed from a single, larger silicon crystal, which requires a more energy-intensive manufacturing process. On the other hand, polycrystalline solar cells are made from smaller fragments of the same silicon crystal, which means that the manufacturing process is faster and cheaper. This results in lower cost for the end user. Nevertheless, it's important to remember that the efficiency of monocrystalline solar cells depends on a lot of factors.

Amorphous solar panels are the most affordable and durable. They have the best efficiency but are also the most expensive. They are the least expensive, but produce less energy than their crystalline counterparts. Amorphous solar cells are also the most durable and resistant to damage. If you're looking for a long-lasting option, thin-film solar panels are the way to go. These panels can last up to 25 years. Make sure to choose the best option for your needs and budget.

Despite their low cost, these solar panels are relatively efficient, with some of them producing more power than others. The most efficient type of solar panel is made of silicon, which has a high efficiency. The monocrystalline type of solar panel has a lower cost. Its cells are more costly than their polycrystalline counterparts. Therefore, it's important to compare solar panel prices before purchasing. You'll need to look at the cost of the various types of solar panels, and consider the size and materials before making a decision.

What Does PERC Mean in Solar Panels?

Passivated Emitter and Rear Contact (PERC) stands for power-equivalent ratio of the solar cell. Using a higher PERC value means higher efficiency. The lower PERC value translates to higher efficiency. PERC is the most widely used material for solar cells. It is a low-cost alternative to silicon. This material is also easy to produce. It is screenprinted onto the rear layer of solar cells.

PERC technology was first developed in Australia in the 1980s. Using this technology, solar cells are able to 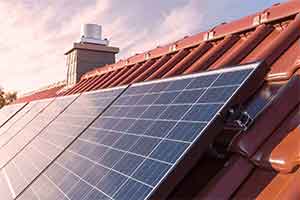 PERC technology is the most recent development in solar panels. It is a modern technology that increases the efficiency of standard PV modules. The most popular Mono-perc modules use this technology. Using this method, an extra layer of passivation is applied to the back side of the solar cells. It helps increase efficiency and increase a module's lifespan by up to 50%. This new material makes PV modules more durable and efficient, allowing for faster ROI and greater savings for the end-user.

PERC technology is an advancement in solar panels. It is a relatively new innovation, but it has a huge impact on the way solar panels perform in the field. Its ability to capture more electrons allows manufacturers to produce more efficient modules at lower cost. This technology is not perfect, but it is superior to standard cells in terms of total energy production and peak wattage. It allows designers to maximize energy output while using fewer panels.

PERC technology has many advantages. In contrast to a conventional solar panel, a PERC panel has a patented technology that adds an extra layer to the backside of the solar cell. This layer is called a passivation layer. This material is a non-conductive material, and it prevents electrochemical reactions. Consequently, it is more expensive to manufacture. But it does not mean that PERC is inferior to other solar panels.

PERC technology is a type of solar panel that uses a special layer to enhance the efficiency of the solar cell. During the day, sunlight strikes the panel and transforms it into energy. During the night, this extra layer is converted to heat. It is the same with a solar panel. This extra layer is known as a passivation layer. It is made up of two layers: the backside and the frontside.

PERC technology is a highly advanced technology for solar panels. This kind of solar panel is made of two types of materials: crystalline silicon and polysilicone. Among the most common PERC panels are the Mono-perc and REC Alpha-perc panels. PERC modules have a higher efficiency compared to other solar cell technologies. They are made with the highest quality material and are available in a variety of sizes and shapes.

PERC solar cells are relatively new. They work similarly to standard monocrystalline panels, but they are easier to manufacture. Unlike the mono-perc cells, PERC cells are made from a unique combination of silicon and aluminum. These cells are more efficient, and their lower PERC value is less susceptible to degradation in temperature and light. And they're also more expensive than standard mono-crystalline solar cells.

The biggest disadvantage of solar energy is the fact that it depends on the sun. Without sunlight, you can't generate electricity. In addition, if you want to use solar energy at night, you'll have to store excess energy and connect it to another power source. Additionally, the cost of solar panels will be higher than other power sources. There are some other disadvantages to solar energy as well. Clouds can block rays of sunlight that would otherwise be absorbed by a solar panel.

One of the main disadvantages of solar energy is its inefficiency. When the sun is not shining, solar panels 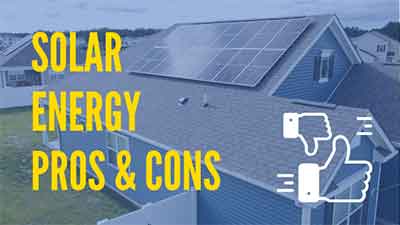 will not produce electricity. This is the most common issue with solar energy. This problem occurs in the winter when the sun isn't shining, and during night when it's cloudy. This means that if you need a constant source of electricity, you'll need to invest in a battery backup system. The downside to a battery backup system is that it increases the cost of a solar panel. It doesn't add any value to solar energy.

One major disadvantage of solar energy is that it's expensive. The initial cost of solar panels can be expensive. However, you can find financing options, including state-backed loan programs, power purchase agreements, and leases. These options can help you pay off your solar panels in the shortest amount of time possible. These options can help you pay off the cost of solar panels. So, if you're considering solar energy for your home or business, keep these two issues in mind when choosing a solar panel.

Another major disadvantage is that solar energy is not available in all locations. While all states receive the same amount of sunlight every year, solar power decreases dramatically as you move further from the equator. This means that people in places like Canada and Russia are at a huge disadvantage when using solar power. For example, the average Hawaii climate has a total of 277 days of clouds and rain each year. Because of the lack of sunlight, there isn't enough excess energy to be utilized for electricity.

The first disadvantage of solar power is the cost. The initial costs of solar panels can be very high, but they will pay off in a short amount of time. It also helps consumers save money by reducing their energy bills. And, solar energy is environmentally friendly and cost-effective. But it's still not free. It's not free. You'll have to pay for a net metering agreement to get solar panels.

The second disadvantage of solar energy is the cost. The upfront cost of solar panels is high, so the up-front cost is usually high. But there are several ways to finance solar panels. There are state-backed loan programs that you can apply for to finance your project. In addition to the financial aspect of the investment, solar panels can also be financed through leases and power purchase agreements. Nevertheless, solar energy has its own drawbacks.

The second disadvantage of solar energy is its inefficiency. It is inefficient, and its output depends on the weather. A sunny day will produce more electricity than a cloudy one. In addition, solar panels cannot store electricity, so storing it is not a viable option at night. In winter, the panels won't generate any power. In order to have a continuous supply of power, you need batteries.