Neutron Transmutation Doped (NTD) Float Zone Silicon is used in semiconductor devices that have to work in extreme environments including space. NTD silicon has the lowest resistivity range of any crystalline silicon wafer.

Buy as few as one wafer!

We have very few requests for NTD Silicon, fewer than in the past.
Currently FZ Silicon can be chemically doped with greater resistivity uniformity (both radially and much better radially) than in the past, so now NTD Silicon has fewer advantages.

But if you need NTD-Silicon, let us know and we'll quote!

Get Your NTD Silicon Quote FAST!

The use of silicon neutrons in various applications is growing, from medical imaging to forensic science. These powerful particles can be used for a variety of scientific research. Scientists are also investigating new ways to detect radioactive materials, including uranium. One of the most promising uses of silicon neutrons is in nuclear physics. While these particles are very rare, their high-energy content and short decay time make them an ideal target for neutron studies.

Because silicon neutron detectors are inexpensive, easy to fabricate, and integrate with readout electronics, they are a good choice for many applications. One such application is in thermal neutron capture. Researchers have also used silicon neutron detectors coated with natural or enriched boron carbide to study the reactions that occur during thermal neutron capture. The neutrons deposited onto the surfaces of these devices are highly transparent to neutrons.

Silicon neutron detectors are ideal candidates for many applications. Since they operate at low voltage, they are easy to fabricate and integrate with readout electronics. Because silicon is transparent to neutrons, it is attractive for use in a wide range of medical and science applications. For example, it has been used in thermal neutron capture experiments with boron carbide, which is a good material for thermal neutron detection.

Another application for silicon neutrons involves the study of silicate rocks, which consist of silicon surrounded by four oxygen atoms. They are called silicate rocks, as the silicate rock's structure is shaped like a mad tangle of chains. In some instances, phosphorus atoms act as donors in the silicon crystal lattice. This makes them ideal for a number of scientific experiments.

The cross section of silicon is relatively small, which makes the use of silicon neutrons advantageous. Because of the small cross section, neutrons are readily captured in the material. The average path for the captured neutrons is a few meters. As a result, the use of silicon in large-volume nuclear radiation detectors is a natural candidate for industrial uses. If the technology can be scaled up to the industrial scale, the results will be highly beneficial for the semiconductor industry.

The technology for silicon neutrons is still in its early stages. Despite the fact that it is more expensive than a conventional magnet, the technology is available at a low cost and is becoming more common. It is possible to build a device using two or more NSL in series, thus achieving full 3-dimensional focusing. The application of silicon neutrons in semiconductor manufacturing is huge, and the advantages of these detectors far outweigh the drawbacks of traditional methods.

The light wavelength of silicon neutrons is very short and the energy density of the beams is low. It is also very hard. A high-frequency electron beam will cause a semiconductor to melt. In addition, a silicon laser is not a perfect mirror, but it will not create the most luminous object possible. However, a high-power neutron beam will be very intense, making it an ideal candidate for high-frequency radiation sources.

A silicon neutrons device is a silicon laser that consists of multiple mirrors separated by silicon wafers. This type of device can focus primary and scattered beams in three dimensions. Moreover, it is also extremely compact, requiring only small sample sizes. Its design can be made from single crystal silicon and is also based on ellipsoidal surfaces. This optical design is similar to that of a laser.

The silicon program uses a special ion beam to irradiate silicon materials for semiconductors and microcircuits. Its irradiation system utilizes four-inch and six-inch crystals. The MIT-NRL silicon lab can provide this service to customers as well. It is also the only facility in the United States that offers this specific type of treatment. The MIT-NRL Silicon program irradiates semiconductor materials for different applications. This unique radiation process enables the creation of ultra-high-quality products.

How Many Neutrons Are in Silicon? 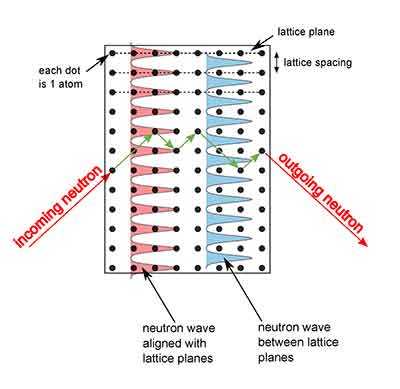 What is Silicon Neutrons?

The high energy of the silicon neutron device means silicon neutrons are perfect for a variety of applications, including nuclear physics. If silicon neutron technology is scaled up to industrial size, then the results would greatly benefit the semiconductor industry. Bulk doping can be achieved through nuclear transmutation, irradiating pure silicon with neutrons in a nuclear reactor.

By doping pure silicon with V-group elements, such as phosphorus, additional valence electrons are added, which are decoupled from individual atoms and enable the compound to become an electrically conductory N-type semiconductor. As neutrons continue to pass through silicon, more phosphorus atoms are produced through transmutation, and so the doping becomes increasingly strongly n-type. As neutrons continue to pass through the silicon, more and more phosphorus atoms are produced by transmutation, and thus the doping becomes more and more strongly n-type. This bond forms a single crystal with the oxygen content, which brings scattered intermediates and the core silicon much closer together, potentially creating a new kind of NTD high-oxygen silicon.

When an atom is electrically neutral, it has the same number of protons as it does electrons. A silicon atom has 14 protons. If it has fifteen, it is no longer a silicon atom. If it has four or more, it is phosphorus. It has an equal number of electrons and protons. Therefore, the atomic mass of silicon is 14. The atomic mass of silicon is 14, which is its atomic number.

How Many Protons Neutrons and Electrons Does Silicon Have?

A neutron has only slightly more mass than a proton, but even its mass is generally assumed to be a single atomic unit. Selenium has 34 protons and 45 neutrons in its nucleus, giving it an atomic number of 34 and atomic mass of 79. Silicon is a chemical element with atomic number 14, meaning that its nucleus has 14 protons.

What Is the Number of Neutrons in Silicon?

Silicon is a chemical element with an atomic number of 14, meaning it has 14 protons in its nucleus. All the other elements have neutrons and protons in their nuclei, like Helium, shown in figure 2.2. For most of the remaining elements, neutrons outnumber protons, as additional neutrons are needed to hold the nucleus together by outweighing the mutual repulsion from an increasing concentration of protons concentrated in a minimal area.

What are NTD Silicon Wafers?

300mm silicon wafer diameter can be irradiated with neutrons to obtain a high-energy neutron beam (e.g. a laser or electron beam). A wide range of silicon wafers irradiate a neutron and a range of different semiconductor types, such as silicon nanotubes, silicon oxide or silicon nitride.

As neutrons continue to travel through silicon, transmutation produces more and more phosphorus atoms, and therefore doping becomes more and more of type N. This bond forms a single oxygen-containing silicon crystal, bringing the scattered intermediates and the intermediate silicon closer together, possibly creating a new type of high-oxygen NTD silicon. Carbon and oxygen are retained as oxygen and carbon silicon and are not affected by the NTD process. A new acceptor and donor are discovered and an electrically active role for hydrogen is established. [Sources: 1, 2, 3, 4]

When NTD is applied to a single silicon crystal, the heat treatment can recover the electrical resistance and life of the carrier. If it suffers from a defect in the centre of the crystal (e.g. a centre of mass defect), it can settle at 800 degrees. However, if it is obtained using the FZ-N-TD method, it cannot recover this medium defect and can only restore electrical resistance, carrier and service life. [Sources: 1] -N-TD method on a single silicon crystal (e.g. in a silicon chip).

NTD works best with silicon ingots of less than 1 mm diameter and 0.5 mm thick. To minimize the effects of inhomogeneity, the silicon ingots and bars are rotated so that neutron irradiation is carried out on both sides. The semiconductor wafers are then measured to determine whether residual radiation is present. A silicon ingot with a diameter of 200 mm is irradiated on a wafer that is rotated during irradiation. ources:

Number of Protons Neutrons and Electrons in Silicon

The atomic number of silicon is 14, and so the number of protons and electrons in a

chargeless silicon atom is also 14. This means if we have 14 positive charges, then we have to define the number of electrons because electrons are negatively charged. For most of the remaining elements, neutrons outnumber protons, since the additional neutrons are needed to hold the nucleus together, by outcompeting the mutual repulsion from an increasing number of protons concentrated in a very small area.