Please let send us your wafer specifications along with quantity for an immediate quote.

What is a Wafer Foundry?

A semiconductor wafer foundry is a facility that makes chips. The process is extremely complex, requiring hundreds of processes to make a chip. The final chip may have many layers and can take weeks to create. In Taiwan, the first "pure-play" semiconductor foundry was created, Microchip Technology, which also provides foundry services to other companies. The cost of establishing a new semiconductor plant can run into billions of dollars.

The process of building a semiconductor wafer starts with the formation of a silicon oxide film. Once the silicon oxide film has been formed, contact holes are drilled into it. Tungsten is then deposited in the contact holes and polished to remove excess tungsten. This is known as plug-tungsten filling. The next step is photo resist patterning, where a resist pattern is formed on the wafer. Copper metal is deposited in the trenches. This process is called a single damascene.

Another process is called Czochralski process. In this process, a solid silicon piece is placed in a bath of polycrystalline or molten silicon. As the liquid grows, it slowly pulls the silicon piece through rotation until it forms a cylindrical ingot. A finished wafer will look round. There are many different types of semiconductor foundries. Each of these types has their own unique capabilities and advantages.

The automotive industry has a high demand for semiconductor devices. For example, advanced driver assistance systems, autonomous self-driving vehicles, and power electronics for electric vehicles all require a significant number of electronic devices. While the automotive industry is a very competitive market, it is still a very lucrative sector for foundries. While many of these devices do not require cutting-edge processes, there are many vendors that are interested in entering this sector.

A semiconductor wafer is a predefined size. Its major sizes are 300mm and 200mm diameters. To create a semiconductor chip, you must first select the appropriate size for your project. For example, you can choose to produce a smaller or larger chip. A large-scale semiconductor wafer foundry can produce both small-scale and high-volume chips. Its size is the most important consideration for semiconductor manufacturing.

What are Some Silicon Wafer Fabrication Techniques

months from conception to production. The first step involves cutting a thin piece of silicon wafer using a diamond saw. The silicon wafer is then cut into 'dies,' which can contain hundreds or thousands of chips. After cutting the wafer into the desired size, it must be annealed. This process is called sputtering.

After annealing, the silicon ingot is sliced into blocks with a diameter specified in the process. The peripheral is then ground to a specified diameter. The orientation of the crystal is indicated by a flat or notch on the surface of the wafer. Large and small diameter wafers are sliced using a laser-grinding process. Both of these processes are critical to the final Si material. Several processes are then used to polish the silicon crystals and make them as smooth as possible.

The next step in silicon wafer fabrication is slicing. The slicing process creates a surface defect known as a saw mark. Lapping removes the saw marks and makes the wafer thinner. This also relieves the stress associated with slicing. After the lapping process, silicon wafers undergo an etching and cleaning process. The acetic and nitric acids are used to remove microscopic cracks and surface damage. The resulting material is then sliced and subsequently subjected to a series of manufacturing processes to ensure accuracy and smoothness.

The Czochralski method uses a small piece of solid silicon. It is placed in a polycrystalline silicon bath and slowly pulled into a cylindrical ingot. The finished wafer is a round disc. However, the Czochralski technique is more expensive than the other two. It is a relatively complex process. After sputtering, the crystal is ground. Once the surface has been cleaned, the silicon wafer is placed in the polishing bath.

The sputtering process involves the removal of rough spots and making the surface smoother. The sputtering process is an efficient and cost-effective way to polish silicon wafers. Depending on the size of the wafer, the final product may have a varying p-well or a single channel of the same type of hole. The final sputtering step is important because it makes it easier to see the shape of the in-plane structures that are used in IC production.

The Czochralski method begins by exposing a small piece of solid silicon to a bath of molten polycrystalline silicon. Once the silicon sputtering solution reaches the desired temperature, it is shaped into a cylindrical ingot. The sputtering process is an excellent way to make thin, round silicon wafers that are ideal for use in electronics. After the process is complete, the silicon wafer is polished to produce the finished product.

The next step in the process of silicon wafer fabrication involves adding dopants. These are elements from Groups 3 and 4 of the periodic table that affect the properties of the molten silicon. The range of dopants is extensive, but some common elements include Boron, Antimony, and Arsenic. A high concentration of dopants is essential for the production of semiconductors. The final step is the lithography stage.

The Czochralski method is the most popular of the silicon wafer fabrication techniques. The Czochralski method involves using a polycrystalline silicon ingot and adding dopants that give the desired electrical properties. A typical N-type ingot contains phosphorus and boron. Its high purity allows it to be used for a variety of applications, including semiconductor devices. The thickness of the silicon wafer is crucial for the semiconductors.

In this article, we will look closely at what makes silicon wafer production process different from other silicon manufacturing processes. [Video]

How Do You Fabricate Integrated Circuits?

The design of an integrated circuit requires a series of manufacturing steps, in which 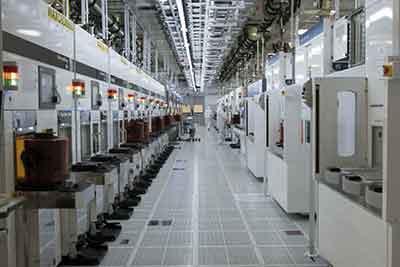 precise amounts of chemicals are injected into selected areas of a silicon wafer to form microscopic devices and compounds. A single silicone wafer goes through hundreds of process steps before the finished wafers are ready, leading to the production of ingots that are fed into electronic products. This gradually reduces the ASP of the ingot, which in turn lowers production costs. The lower ASP for silicon The reason for this is the pressure from the solar and PV cell industry. [Sources: 3, 4, 9, 11]

The huge capital investment of the G450C consortium participants has become sustainable, as the consortium also ensures the ability to generate a steady demand for newly produced silicon. However, it will take several years for new suppliers to meet the demand for the next generation of high-end electronics from new silicon wafers. [Sources: 1, 9]

The semiconductor wafer fab equipment market is divided into three major segments: silicon wafers, fab fab devices, devices and equipment. Apart from that, it is dominated by various types of devices such as semiconductors, chipsets, components and other materials. Monitoring the wafer production environment includes monitoring the temperature, humidity, temperature and humidity that the silicon wafer is exposed to, which can negatively affect its production yield. [Sources: 2, 14]

The pertinent observation is that the scope of functioning of silicon wafers is much higher than that of compound semiconductors. The above data analysis has taught us that in order to ensure the quality of the silicon produced in semiconductor wafer factories, it should not be used in the manufacture of electronic products. In the manufacture of top-class silicon wafers, manufacturers rely on wathers specialists such as Pure Wafer to help test top-class shafts and support the films to fully optimize the production process. [Sources: 3, 9, 11]

With continued investment in innovation, UniversityWafer, Inc. was founded to keep pace with the next generation of semiconductor technologies. We also offer special services, including the production of high quality silicon wafers for medical and electronic products. UniversityWafer, Inc. collaborates with some of the largest medical electronics manufacturers in the country and provides the highest quality silicon wafer manufacturing equipment and services. Through America's leading research and science universities, we provide the best education, training, and technical support to the medical industry. [Sources: 10, 11]

Our wafers are not the only place where silicon is used, and they are not even close to the largest consumer silicon. UniversityWafer, Inc. has been selected by some of the leading military contractors in the US Army, Navy, Air Force, Marine Corps, Army Corps of Engineers, Department of Defense and many other government agencies. The UniversityWafer, Inc. website is one of the few that provides access to a comprehensive list of equipment and services for the production of silicon wafers. Our two leading suppliers demonstrate our ability to produce flawless silicon wafers, controlling more than 90% of the world's medical electronics and medical device production capacity, as well as the vast majority of the world's medical devices. [Sources: 0, 6, 10, 12]

Many of China's domestic silicon suppliers supply wafers up to 150mm or smaller, but silicon wafer manufacturers are experiencing booming demand, resulting in tight supply and high prices for wafers. [Sources: 1, 5]

While China's silicon wafer suppliers continue to lag behind international peers in manufacturing capacity, the region's silicon production ecosystem is maturing and becoming more integrated. Due to the rapid growth of silicon production in China, according to a recent report by the Chinese Academy of Sciences, the country's central and local governments have enabled the financing of several silicon wafer production projects in recent years. [Sources: 1]

The Wafer Semiconductor Factory (FAB), built in India, is the first of its kind in the world and an indication of what India can do in terms of silicon wafer production capacity and supply chain integration. The idea of setting up a wafer production facility for S-semiconductors [F AB] unit in India is a clear indication that India could do well as a major silicon manufacturing center in the Asia-Pacific region. [Sources: 8]

The five largest wafer manufacturers, which generate more than 90 percent of the market revenue, are the first to do so. The advantage of working with larger diameters is more pronounced, as the basic material costs for compound semiconductors are lower. More recently, the ability to build these devices at a lower cost per square inch than traditional semiconductor wafers has led the industry to produce a wide range of high-performance, low-power devices. Cooperation is essential to ensure lower costs and better product quality for the consumer and commercial markets. [Sources: 1, 3, 7, 9]