What is Anti-reflection (AR) Coating?

What is Antireflection Coating?

Those of you who are interested in solar energy might be wondering if this layer is important. There are several factors to consider before deciding to use this coating. Here are some of the common problems associated with antireflection coatings, along with the materials and techniques used to apply them. Contact us for an immediate quote for our AR coatings.

A scientist from a leading university ask for a quote on the following.

Pls see below for the offer on required Ge or Silicon Wafer with AR Coating @ IR 8~12um optic wafer,Pls see

attached real value for the transmission data we had ever done. 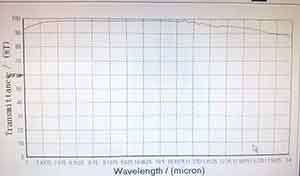 What are the Problems with Anti-Reflective Coating?

One of the most fundamental principles behind effective anti-reflection coatings is the existence of a thin layer, called an intermediate layer, which cancels the reflective effect of a much thicker one. However, the thin layer only works for a narrow band of wavelengths, and its maximum reflectivity is only observed at the center wavelength. Such coatings are usually applied to a single laser bandwidth, and their effectiveness depends on complex wavelength mechanisms. Unlike other anti-reflection coatings, however, they are also susceptible to destructive interference.

These problems arise because the refractive index at each boundary of the layer must be equal, and the thickness of the layer must be an odd number of wavelengths. Another important problem with anti-reflection coatings is the limited bandwidth of these coatings, so the choice of the proper one is a key issue. A skewed spectrum will not produce good contrast. As a result, the resulting images will be too grainy.

What Materials Are Used for Anti-Reflective Coating?

The primary material used in antireflection coatings is a crystalline material, and the thickness of the layer is controlled to achieve the desired refractive index. Typical layers contain MgF2 and Al2O3 and are graded to reduce reflection over a broad range of wavelengths and incidence angles. Single-layer AR coatings use MgF2 as their primary material, while a three-layer coating uses a mix of MgF2 and 0.5lt of CeF3 (n1 = 1.64)/Glass.

Multilayer antireflection coatings are fabricated on 525 mm-thick silicon wafers. They are deposited by thermal evaporation from a tungsten boat at a rate of 0.2 to 0.4 A s-1, respectively. For example, MgF2/GdF3 has an e-value of 1.53 compared to the desired value of 1.0.

Antireflection coatings can be made in a variety of ways. Some techniques, such as texture-based coatings, use a separate mechanism that allows the light to add or subtract destructively. These methods are most commonly applied to optical glass and crystals, although plastic optics are also a viable option. Techniques vary depending on the wavelength of light and the angle at which the light hits the coated surface.

A single-layer coating can suppress reflections by diffuse scattering. This is suitable for many displays and viewing ports, but is not suitable for laser applications. A thin-film coating can produce anti-reflection properties by using a single layer with a refractive index close to the geometric mean value of the two adjacent media. In this configuration, two reflections of equal magnitude arise at the two interfaces and cancel out through destructive interference.

In order to minimize reflection, an antireflection coating must have at least one intermediate layer, which is similar to impedance matching in electrical signals. Such an intermediate layer can be composed of a single layer of oil that temporarily defeats total internal reflection and allows light to couple into the fiber. The process can be repeated over several layers to further reduce reflection. Each successive layer of oil has a refractive index that blends between that of air and the substrate.

Texture-based antireflection coatings reduce reflection at wavelengths comparable to the feature size. Alexander Smakula developed this type of antireflection coating in 1935 while working for Carl Zeiss, a famous optics manufacturer. These coatings remained a German military secret for several years before the Allies discovered them during World War II. The technology was further developed by Katharine Burr Blodgett in the late 1930s.