What Silicon Spec is Used to Fabricate Darlington Transistors?

What is Darlington Transistor?

You may be wondering what is Darlington transistor and how they differ from Bi-polar junction transistors. Listed below are a few things you should know about them. In addition to their names, they are often used interchangeably. The difference between these two types of transistors lies in their characteristics. A Bi-polar transistor is a low-impedance device that has a relatively low output impedance, while a Darlington transistor has a much higher one.

What is a NPN Darlington Transistor?

An NPN Darlington transistor is a semiconductor device that contains two BJTs. Its emitter is connected to the base transistor's o/p. Both transistors have different types of characteristics. They can be classified based on their polarity, Max CE Voltage, and DC current gain. They can also be divided based on their packaging. The following information will help you to choose the best NPN Darlington transistor for your project.

What is a Bi-Polar Junction Transistor?

What is High Current Gain?

What is High Input Impedance?

The bipolar Darlington transistor is an analogous device to the FET. However, it has several advantages over the FET. First of all, it offers high transconductance and input impedance. This allows it to be used for applications like high-gain low noise amplifiers, cascadable gain blocks, and high-frequency optocouplers. High input impedance allows this device to be used as a power source. The next advantage of the HBT is its low input impedance, which makes it a perfect choice for cascadable multistage amplifiers.

Compared to the normal transistor, the Darlington transistor has a relatively high current gain. It is also known as a Super Beta Transistor, and is comprised of two PNP and one NPN transistor, all packed together in a single package. The transistors share the same base collector terminal. In this way, they are both used as a single component. Moreover, they are cheaper than the TIP120 and TIP121 transistors.

The base terminals of the Darlington transistor are not connected in parallel, so a low-voltage source is needed. To increase current, the base current must be switched between a negative and positive value of 0.7 volts. This reduces the voltage drop across the terminals, causing a large collector and emitter current. However, higher voltage can reduce the voltage drop across the base terminal.

A charge pump is a type of switch that generates high bias voltages from a low-voltage supply, typically a battery. The device can then drive a white LED or LCD. It is an ideal choice for low-power applications since the switching frequency and capacitance are relatively low. In addition to its power-saving capabilities, charge pumps are also capable of high switching frequency. The following are examples of devices that use charge pumps.

One of the most important considerations in designing a battery-powered device is power provision. These devices may be wearable, implantable, or portable. They may use energy-harvesting technology to save power. Some of the use cases involve continuous monitoring of the environment, which prolongs the device's life. To achieve this, power consumption must be kept low while maintaining performance. To achieve this, low-power electronics require collaborating with experts in the field.

The energy harvesting concept is also gaining a lot of interest. Eventually, piezoelectric materials will be optimized to power sensor devices in remote locations. They may also be used as self-powered sensors in the human body, thereby avoiding the need for costly maintenance. Wearable sensors are designed to monitor vital functions and will eventually replace many accessories. The intrinsic properties of piezoelectric materials are constantly improving. Its potential to power low-power electronics devices is endless.

Another technology that could reduce energy consumption is printed electronics. This technology can be used on everyday objects and even unconventional substrates. To meet the demands of the Internet of Things, the printed electronics must be ultra-low-power, thereby reducing the overall power consumption. While the printing techniques have evolved greatly, the power consumption problem has remained an unsolved challenge. The solutions available at the time were too complicated for commercial production.

Definition of a Darlington Transistor

A Darlington Transistor is a type of semiconductor device that provides high current gain by using two transistors connected in parallel. They are popular in discrete and IC forms. Their current gain is proportional to the product of their base driving current and their sensitivity to external signals. However, the voltage drop of a Darlington pair is much lower than that of a single common emitter transistor. In some applications, this type of transistor may be necessary to increase the gain of a circuit. 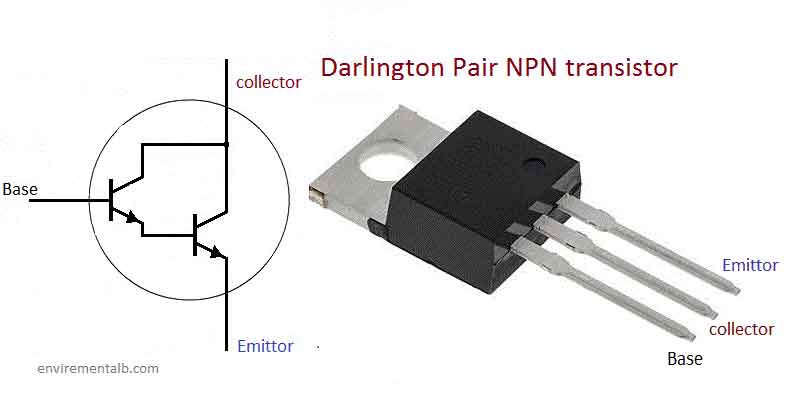 The basic working principle of a Darlington Transistor is that it is a pair of NPN transistors linked together. The base of one transistor is connected to the output transistor's base, and the emitter is connected to the base of the other. Normally, the Darlington pair acts in a conventional manner, but when the output voltage falls below its input saturation, it conducts. This happens because the base current of the first transistor drives the emitter of the second transistor, which is then biased to zero volts. Therefore, the output voltage drops below VSAT.

The circuit shown in Figure 2 has an extra emitter 41 connected to its base. This emitter has an area m times larger than the emitter of the other transistor, and when inverted, it serves as a collector, which provides a feedback path back to the transistor's base. The resulting current gain is B12 xB13. The current gain of a Darlington Transistor can reach up to 500 mA.

Is a Darlington Transistor High Gain as Sensitive as other Transistors?

To make a transistor with a higher gain, you need to pair two or more transistors so that the firsts collector current is amplified by the second. The famous pair of Darlington-connected transistors is typically used in cases where a higher current gain is desired.    Show Source Texts

Compared with single transistors, driving an inductive load using Darlington pairs is more efficient, since it offers higher current at the load while the base current is lower. The Darlington pair of transistors is mostly used as it offers particularly high current gain, which is also reflected by higher input impedance of the Darlington circuit overall compared with a single transistor. A Darlington Pair generally produces a higher current gain (roughly a product of the gains of the two bipolar transistors, because of the fact their B values are multiplied together). A photodarlington-type transistor gives a higher level of sensitivity at lower levels of light, since it provides the current gain equivalent of the two transistors.    Show Source Texts

What does a Darlington Transistor Do?

In electronics, a multiple-transistor setup called the Darlington setup (commonly called the Darlington pair) is a circuit composed of two bipolar transistors, with the emitter of one transistor connected to the base of the other, so that current amplified by the first transistor is amplified further by the second. Although a Darlington pair circuit is commonly used in its basic form, it is frequently seen with a bypass resistor between the base and emitter connections of the last transistor. As a result, transistor Q 1 acts as a base-emitter diode, with at lower frequencies having a low-signal circuit which is just the resistor R E = V T/I E, with the I E being the current from a Q-point DC. As we know, a small base current is required to drive a transistor to conduction mode, with base connected as the input, emitter as the common, and collector as the output.    Show Source Texts

With the base connections open, a collector-base current needs to flow through the base-emitter circuit, and thus current flow is amplified through the usual operation of a transistor. For a silicon transistor, this means that in order to have the current flowing in the collector-emitter output circuit, the input base needs to be approximately 1.2 to 1.4 V above the emitter. The output current from a second transistor is quite high, which is enough to drive high loads. Since it is impossible to boost base current because of supply sources, the only way to boost the loads current capacity is by boosting the transistors gain.    Show Source Texts

The base terminal current of an incident photon can be amplified via the transistors gain, which results in current gains ranging from 100 to 1,000. The results imply that if two transistors of moderate current gains, 50, were used, then the total current gain would be 50 x 50 = 2,500. If transistors Q 1 and Q 2 in Figure 11.1 were identical (i.e., had identical-sized emitters, and therefore had equal I S), the input-to-output current ratio, or gain, would ideally be 1.    Show Source Texts

If we treat the emitter base voltage, V IS, as an input, and collector current, I C, as the output (figure 11.3), then we can treat a transistor as a nonlinear voltage-to-current converter with exponential characteristics. As a result, with this transistor coupled by diodes, the collector current serves as an input quantity while the base-emitter voltage, V BE, serves as an output quantity, using a logarithmic transfer function from the base-emitter junction. The diagram above shows the Class A amplifier circuit using a Darlington transistor setup for having high collector current.    Show Source Texts

In other words, the circuit operates in a normally higher-gain Darlington mode, but it will have the lower saturation voltage of the individual transistors. If the resistor is lower in value, and sucks the current out of the second transistors base, the current gain is reduced, and an equation for overall Darlington gain must accommodate that. With no light falling on the transistor, the current flow due to thermally generated holes-electrons pairs will be low, and the circuits output voltage will be a little lower than its supply voltage because of voltage drop through the resistor load R. With light falling on the collector-base junction, current flow increases.    Show Source Texts

Since it is far easier to maintain a constant temperature of the driver transistor, it is obvious that maintaining stable bias current using the composite pair would be far easier than could ever be done using the Darlington pair. To achieve as high of a gain as possible, it is essential that either circuits driver transistor has sufficient collector current to provide an acceptable HFE. This is where the term super transistor actually comes in, as the Q1 has more than 5 times as much gain as a otherwise identical circuit using Darlington pairs (296 voltage gain versus 58). Darlington pairs have a higher phase shift at higher frequencies than single transistors, and thus may become unstable with negative feedback more easily (i.e., systems using this setup may suffer from low performance because of extra transistor latency).    Show Source Texts