In the year 2017, a research study by the International Trade Center revealed that the semiconductor industry was worth 2.48 billion US dollars globally. Another study done independently by the Semiconductor Industry Association indicated a rise by 12.7 percent in the worldwide semiconductor sales for one year between October 2017 to October 2018. This was way higher than their initial projected growth that was at 2.6 percent for the same period. The fabrication of various electronic devices does incorporate the use of silicon wafers at some stage. The generated revenues from this industry in-turn created various opportunities that are valued to be worth 402.27 million US dollars during the year ending 2018. Further, it annual compound growth rate on silicon wafer demand between the year 2019 and 2025 is estimated to be 8.5 percent.

In countries such as Japan, Philippines, India and China the consumer and automotive markets have been considerably growing by significant rates. Consumer products such as televisions, computers and mobile phones have attributed to the high demands. Automobile sales have also risen due to the improved living standards of the people in the listed countries. This has contributed largely to the growth of the automotive semiconductor sector. In the year 2018, the silicon market share in the Asian region was at 32.36 percent.

Silicon wafers are used to make integrated circuits and solar cells. Silicon wafer vendors find their markets in consumer electronics, automotive industries, health care and the telecommunication sector. The use and acquisition of mobile electronic devices has been increasing steadily. A study by the Global System for Mobile Communication estimated that new mobile users was at 5.1 billion in the year 2018. By 2025, the number is expected to be higher with an annual growth rate of 1.9 percent. 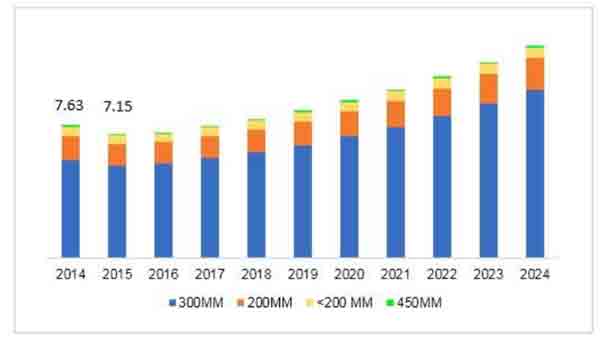 Factors leading to the growth of silicon wafer market.

a. Developments in the automotive industry.

The worldwide automotive electronics market is estimated to be at 48.13 billion US dollars in the year 2019. This value is expected to reach 129.17 billion US dollars by the year 2025 given an annual growth rate of 17.9 percent. Vehicle production has increased globally in the recent years where most of these modern automobiles rely heavily on electrical systems. This has resulted to the increased demand on power diodes and voltage regulators among other key components. Innovations in this sector have made it possible to have three-dimensional mapping, electric propulsion systems incorporating specially designed batteries and advanced driver assistance systems that improve the safety properties associated with driving such as avoiding collision and accidents. Further, autonomous cars are projected to increase the demand of semiconductor devices as they rely more on electronics.

Integrated circuits particularly developed to be used in automotive applications do support functionalities such as infotainment systems, collision detection systems or navigation control. Electrification and automation of vehicles have made electronics have a major share in propulsion systems in this sector. There has also been a requirement of higher processing power owing to the increased number of sensors in modern vehicles. The increased need of luxury in the vehicles has also been a key factor to lead to an increased demand. The main companies offering semiconductor-based solution to this industry are, Toshiba corporation, NXP semiconductor NV, STMicroelectronics, Infineon Technologies AG and Texas Instruments Inc. 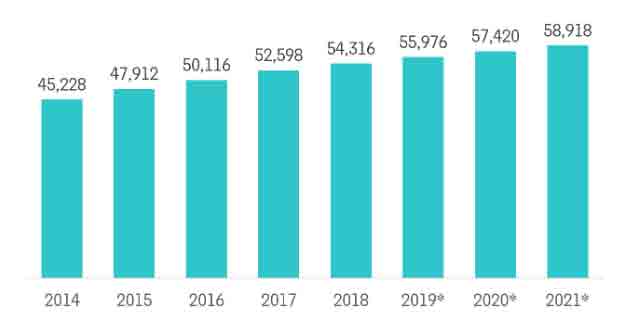 The worldwide global positioning system demand increases annually at an average percentage of 10%. Fleet management systems have been outlined as a key contributor to this upward trend. With the integration of GPS to fleet management systems, fleet managers can monitor the conduct of drivers, improve productivity and reduce the operation costs. In the recent past, GPS tracking has also been incorporated into commercial vehicle monitoring and cargo container tracking. The information obtained from GPS tracking systems can be analyzed such that fuel consumption and vehicle routing can be predetermined. This will ultimately reduce the downtime and better utilization of the workforce. Other markets that GPS services have been recently integrated is in construction and mining. Since the devices used in this service are silicon based, the need for silicon-based semiconductor wafers is set to increase with the market expansion. 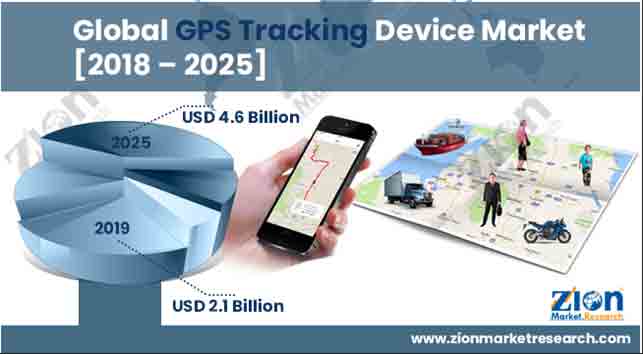 c. Innovations in the health-care industry.

Health care technologies such as ultrasound scanners, sensors, magnetic resonance imaging, pacemakers and x-ray machines all use silicon-based semiconductors to aid in addressing various health issues. The current technology has made it possible for health practitioners to perform clinical diagnostics, cardiac resynchronization therapy, medical imaging among other critical roles. Besides, there has been an increase in the need for home-based care systems that necessitate a variety of portable health care devices such as glucose and blood pressure level monitors all which rely on semiconductors heavily. Wireless patient monitoring has further created a window where one can access health services virtually. This growing need of health care solutions are a key reason why the silicon wafer market is expected to grow considerably.

With semiconductor technology robotic surgery systems have been developed where a doctor virtually conducts surgery operations. Surgical devices mounted to the robot’s arms are used to preciously cut through and stitch areas of interest while maintaining minimum invasive surgery which in the long run enables faster recovery of patients. The imaging system is also magnified such that the doctor does not have to strain as he or she undertakes the operation. Further, retinal implants can be done to recover sight in some partial vision instances by applying neuromorphic technology which copies the human brain. All this approach in the medical field have increased the demand of silicon wafers globally.

The continuous advancement on Internet of things does open a pathway where several devices will be connected in a given specified way. This will result to a stable and constant silicon wafer demand in the market. Also, the improvements on silicon-on-insulator wafers will create a market for virtual reality kits and three-dimensional cameras.

However, a high initial investment is needed with an uncertainty on return of investment for one to engage in the supply of silicon wafer-based semiconductor devices. The wafers produced are also delicate thus it is important to handle the whole process with care.