III-V Substrates for ULtraRAM devices can be grown on n-type GaAs substrates. In this article, we describe 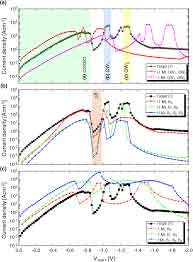 the OFF InGaAs channel design, growth of III-V ULTRARAM devices, and reliability studies on one memory element.

An OFF InGaAs channel design improves the read and write contrast of ULTRARAM devices. The process used in ULTRARAM devices has the potential to improve endurance and nonvolatility. The process is based on an eight-layer lithography process with multiple dry etches, sputtering and thermal evaporation.

Growing III-V ULTRARAM devices requires a high-quality III-V substrate and a high-quality epitaxial growth process. Both of these processes are complex and require careful consideration. Direct epitaxial deposition has many challenges, including a polar interface, differences in lattice structure, and differences in thermal expansion coefficients.

The high-quality InAs/GaSb interface has two distinct properties. The InAs conduction band is below the GaSb valence band. Furthermore, it features intrinsic Ga vacancies and antisite defects. This allows the flow of holes and electrons from GaSb into InAs.

The nonvolatile III-V memory, ULTRARAM, has the potential to achieve ultralow-energy electron storage, and can be accessed via a triple-barrier resonant tunneling heterostructure. The researchers at Lancaster University and the University of Warwick hope this technology can become the basis for a universal memory.

The ULTRARAM material structure is fabricated on a 2-inch n-type GaAs substrate using molecular beam epitaxy. It contains layers of GaSb/InAs/AlSb that provide the active part of the memory element.

The first step in this process is to deposit a thin GaAs film on the surface of a GaAs wafer. Once the GaAs layer is deposited, the wafer is bonded to the GaAs substrate. The resulting device has a minimum FWHM.

Unlike epitaxial growth, non-epitaxial growth techniques have a lower switching energy. Furthermore, the devices display high retention rates. In addition, they have more than 1000 years of degradation-free endurance. These results exceed previous studies of similar devices grown on GaAs substrates.

Further testing on a 20-um device at room temperature and in the absence of VCG-BG biases demonstrated the stability of the memory element. The device underwent 106 programme-read-erase-read cycles under these conditions. The test also confirmed that it retained its memory window over a 24-h period. The device was capable of 50 partial switches during the 106 cycles.

The resulting devices display a P/E cycle 2000x faster than the previous generation of devices. These results suggest that these devices could be significantly faster than DRAM and comparable with static RAM. However, these results have to be validated in actual devices. In order to improve the stability of these devices, researchers need to improve the quality of the materials. They must further refine their material epitaxy process.

Reliability studies carried out on one memory element

One memory element of UltraRAM devices was the subject of reliability studies. This memory element showed a stable current contrast between the active and inactive states over eight readout cycles at 0.5V SD bias. It was operated at a rate of 200/minute. The results are presented in Figure 2. The gray and red areas show the endurance data of memory cells. The data for the blue shaded region was determined by subtracting the program and erase current.

ULTRARAM is a new form of memory that combines non-volatility of data storage memory with the endurance and energy-efficiency of a working memory. The new technology exploits the special properties of compound semiconductors, which are commonly used in photonic devices, but are not widely used in digital electronics. Until now, silicon has been the material of choice for digital electronics.

One memory element of an UltraRAM array contains 288 Kb of memory. UltraRAM blocks are typically arranged in one or more columns, with 24 blocks per clock region. They can be cascaded together using dedicated cascade routing and a small amount of logic resources. This cascading feature eliminates any timing penalty when UltraRAM blocks are pipelined.

UltraRAM's endurance is much higher than that of existing flash memory. Its endurance is 100 to 1,000 times greater than that of the fastest DRAM memory. Furthermore, UltraRAM devices are energy efficient and have high switching speeds. It will be a one-stop solution for the RAM and storage requirements of PC systems.

Reliability studies carried on one memory element in UltraRAM devices differ from those conducted on multiple memory elements. The true score of a memory element can change if there are multiple errors. Therefore, ROC analyses are not appropriate for the same-score measurements.

What Substrates are Considered III-V?

In mid-2013, we published an article about how RAM volume affects game performance. We are therefore delighted to present our RAM benchmarking analysis for the upcoming third-person shooter III V: Substrate. [Sources: 3]

The formula for the exact speed classification is based on the number of computers using DDR memory (see below). DRAM density and speed trends strongly correlate with the age of the computer and its operating system. Generally speaking, it follows that speed assessments meet the standards of the generation. The problem is that the system is too complicated to understand. RAM is also called PC3 12800, DDR4 2400 RAM is also PC4 19200, and so on. [Sources: 1, 5]

If your mainboard accepts DDR4 RAM at 3600MHz and you find a sweet deal with a module with a maximum frequency of 2400MHz, you can install it gladly. If your laptop motherboard is designed for DDR3 memory modules, it uses "DDR3" and not "dDR2" or "DRAM4." [Sources: 5]

As I have indicated above, I am saying here more directly, do not buy low - spec "d - RAM" if you overclock it to the next RAM level. [Sources: 3]

You will want to focus on the bios of your computer and adjust it to the right speed by activating Intel's Extreme Memory Profile (XMP) and adjusting the speed. Also note that installing inadequate RAM dimming at different speeds and timing ratings is generally fine, as long as your motherboard is smart enough to handle the different hardware. Note also that some mainboards may not run the RAM at all at the specified speed, but only at a certain time. [Sources: 5]

If you buy DDR4 - 3600 RAM, the motherboard can clock anything up to DDR 4 - 3400, if it supports this, and enthusiasts can overclock the rating clock of the RAM clock. RAM is a commodity, so it is better to have more RAM available than faster RAM, higher quality, more expensive RAM has lower latency, faster RAM will give your PC better performance in certain specific benchmarks, etc. Remember that while there are many different types of RAM (some of which are the same size and run on the same specifications), they are not the "same" product and probably never were. The old argument that using a suitable stick gives you more stability and performance is no longer true. [Sources: 3, 5]

Similarly, it is pretty obvious that more gigabytes of memory (also known as RAM) is a good thing. RAM has an updated standard that allows data to be stored in memory at a much faster speed than the previous standard, asynchronous RAM. This is one of the main reasons why asynchronous RAM storage has replaced SDRAM as the most popular form of RAM for high-end computers. [Sources: 1, 5]

The writing speed of flash memory is often much faster than the typical block size of NAND flash, which is in hundreds of thousands of bits. The fastest eMMC ICs have a write-to-data lifecycle of only a few thousand bits per second. If you use MLC - Nand, you expect an average write cycle of data - life cycle - to be less than one millionth of a second and one and a half times faster. [Sources: 4]

The faster the number, the faster your computer can store and retrieve data stored in the local memory. By optimizing what your processor can do, you can achieve higher performance levels by using newer, faster, and more efficient memory, according to the researchers. [Sources: 5, 6]

Buying faster RAM mixed with slower RAM has no real advantage, but can help computers with an integrated GPU, such as Intel's Intel Core i7 - 6700 K or AMD's Radeon R9 290X with accelerated GPU. With faster memory, your system will be clocked to reach the amount of memory it has access to, rather than the total amount. [Sources: 5]

A typical SSD, on the other hand, delivers 2.5 times as fast as a standard SSD. The number of times will decrease greatly over time, which is bad because NAND flash memory is getting denser with the application of multi-layer cell technology. S-8V 3.0, which is still under development, is supposed to improve the speed by adding layers from 48 to 64. UK III V, named after the element in the periodic table used in its construction, would reportedly consume more than twice as much memory as the current generation of SSDs. [Sources: 0, 4, 7]

This means, of course, that thread rippers and Epyc CPUs support a much wider memory bandwidth, allowing important data to be transferred and processed much faster. Hard drive provisioning can improve performance and extend the life of an SSD, reducing the need for NAND flash storage and other storage devices. The double speed increase is driven by the bandwidth of the current UFS 2.0, which is designed for high-performance data transfer speeds of up to 1.5 terabytes per second. EPYC has a lower clock speed, but consumes less power and is 2,000 times faster than a standard SSD. [Sources: 2, 4, 7]