What is Laser Liftoff?

A scientist as a US university requested a quote for the following:

As part of a research collaboration with a couple of academic faculty working on microLED optimization, we are seeking backside CMP for (undoped) GaN, after laser lift-off from the sapphire substrate. Your CMP services page describes extensive experience with tungsten. Do you happen to know of a services provider who supports GaN CMP? (I understand there are a few providers of a slurry composition optimized for GaN.) PS. I provided the faculty with your product web site, and they will be contacting you in the future for wafer orders. Thanks very much in advance for the insights!

My understanding from the faculty is that they will be working with 2" sapphire wafers, on which they will be epitaxially growing unique microLED layers.

I forwarded your earlier message about CMP to the faculty, and asked that they help me prepare a more detailed description of the material layers, thicknesses, a cross-section drawing, wafer count for various experiments, rough project timeline, etc.

I know you need this information as part of an RFQ. As soon as I hear back from them, I'll pass along the info.

PS. The faculty are also seeking a source for temporary front-side wafer bonding and laser lift-off of the sapphire substrate. (The research group has experience with the design and fabrication of uLEDs, but don't have a lot of other equipment available in their lab.) If you happen to know a source of laser lift-off support, that'd be most helpful.

"I am just beginning to learn about micro LEDs and would like to fabricate one in the near future. Could you tell me more details about GaN on Sapphire wafer GaN 50.8mm N/Si <0001> 430um SSP GaN layer 5.0um? What layers does it have? Is the GaN doped? How is the color determined? "

What Substrates are used for Laser Lift-Off? 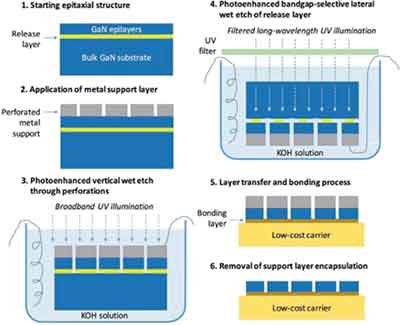 The laser lift off of GaN film delamination observed on sapphire substrate wafers is associated with a pad isolation trench, which is required for the delamination process. Laser lift off of GaN film delaminates the epilayer on the exposed area, which is confirmed by I-V measurements. In addition, EDX spectroscopy shows a void between the reflector metal and SiO2. This void is attributed to the thermal mismatch between the reflector metal and GaN epilayer. The gap between these two layers is expected to be the site of the delamination, as the free standing epilayer tends to relieve this compressive stress.

The resulting GaN film delamination is characterized by a large, flat surface. The resulting flat surface is relatively smooth, with a scan pitch of about ten um. However, it is important to note that laser lift off will cause the N-polar surface of GaN to be exposed to high temperatures, which may cause cracking.

Laser lift off of GaN film delaminating on sapphire substrate wafers was previously demonstrated in Hsueh et al. It required a 2 inch GaN wafer, and a sacrificial layer of ZnO. Then the GaN epi-layer was transferred on top of the ZnO monolayer using HCL as an etchant solvent.

Novel line beam laser lift-off processes are becoming more popular for fabricating two-dimensional microstructures. One such technique employs high-viscosity nano-suspensions to control the shape and size of the lifted voxels. The process is applicable to the fabrication of 2D and 3D microstructures.

The technique successfully separates GaN and Gallium nitride layers grown on sapphire substrate. The separation is achieved through the absorption of 248 nm excimer laser radiation. This absorption leads to the formation of a metallic gallium and a gas called nitrogen. The sapphire wafer can then be easily removed. Different microscopic surface analysis techniques have been used to analyze the resulting metallic gallium phase. The results indicate that the metal phase does not significantly affect the structural quality of the GaN layer.

Novel line beam laser lift-off process has several advantages. It can be used for plastic and glass substrates. It requires very little maintenance, which enables large-scale production. One disadvantage is that the process requires a relatively expensive laser system. In addition, it is sensitive to variations in laser parameters. This means that the process may reduce yield if power fluctuations occur.

The results obtained in this process are compared with those of conventional square-field LLO processing. They also evaluate the suitability of the technique for mass production of HB-LEDs.

Laser lift-off release films are used for a variety of applications. These films make the process of peeling off flexible substrates easier and reduce stress on the substrates. They also minimize ash formation during laser irradiation, which improves productivity and yield. In addition, they prevent deformation of the carrier substrate.

Laser lift-off release films are a convenient and cost-effective solution for a wide range of applications. They are especially useful in micromachining applications. They can reduce processing time by allowing the process to be more precise and accurate. In addition, they can be easily applied to complex shapes.

These release films are highly versatile and are compatible with many different photoelectrochemical devices. They protect the material surface from corroding electrolytes and enable a variety of electrochemical reactions. For example, they are used to produce photovoltaic cells. In these applications, laser lift-off release films offer a versatile solution for protecting the surfaces of semiconductors.

Laser lift-off release films also reduce the cost of processing a device. By removing the carrier substrate during LLO, they can be significantly lower than the cost of traditional mechanical lifting. Furthermore, they can protect adjacent functional layers. It is essential for a manufacturer to use a reliable release film when making a laser-based device.

The PFLO process can be used on different types of polymers. It has been successfully tested on a wide variety of thermoplastic and thermoset polymeric films with the same PulseForge equipment.

One embodiment of a laser lift-off apparatus employs a mask having openings (M1-M6) that serve as laser light emission units. The openings are spaced from each other and are arranged staggeredly. The laser light emission elements are spaced apart from one another in at least two rows. One of the rows is arranged perpendicular to the moving direction of the workpiece.

A significant portion of the remaining light is absorbed by indium-rich spots in a multiple-quantum well (MQW). This process can result in local ablation of the p-GaN layer. However, the density of these surface defects depends on a variety of factors. Although the exact values vary from one process to another, they are typically in the range of 0-105 cm-2.

One major advantage of laser lift off is its ability to increase throughput. This process is performed in a short period of time, and the laser light emitting units are separated from one another and superimposed in series at intervals. Unlike in a conventional semiconductor manufacturing process, the irradiation energy from separate laser light is not added up, so they are not additive.

Ultrashort pulse widths are also a factor, which reduces structural damage. In contrast, short-wavelength and high-energy photons have a shallow optical penetration depth, which may make them ideal for separating semiconductor layers. High-energy photons have high peak energy and have the advantage of being able to penetrate layers of material with a higher frequency.

The application of laser lift off in flexible OLEDs is a process that allows flexible OLEDs to be fabricated. The process uses a laser to lift off the sensitive polyimide film from the carrier substrate. This process can increase productivity by up to 30 per cent.

Laser lift off is a process that is commonly used in flexible display manufacturing. It involves peeling off the polyimide and glass layers from the carrier substrate. This process minimizes the resulting stress and damage to the carrier substrate. It also reduces the amount of waste created during exfoliation, which lowers manufacturing costs. Furthermore, the laser lift off process helps in improving the product's quality.

The process is applied to a variety of materials. For flexible OLEDs, an excimer laser source is used. Excitation from an excimer laser creates a plasma at the interface between the two materials, enabling clean debonding. Laser lift off also allows fabrication of complex, thin structures.

This process is an ideal way to produce flexible OLEDs. The light that reaches the polyimide surface is converted into thermal energy that will ablate the polymer. For this purpose, a finite element analysis (FEA) model using COMSOL Multiphysics software is developed. The model's geometry closely resembles the stack used in the PLO process. Thermal gradients in the resulting stack are solved using the three-dimensional heat conduction equation.

Laser Lift-Off equipment is an important part of the front-end process for flexible OLED manufacturing. It is used by South Korean companies, which control 95 percent of the world's market. However, these companies usually depend on foreign companies to supply the optical system. Recently, Philoptics, a South Korean company, has provided their own optical system for a number of flexible OLED production lines. The company was founded in 2008 with the goal of localizing the photolithography stepper.