What Wafers Are Used to Fabricate QCL Gas Sensors?

What are QCL Sensors Used For?

Quantum Cascade lasers are highly efficient, high power lasers whose main contributions are: sensitivity, efficiency, energy efficiency, and accuracy. This is a breakthrough and unique device developed by Bell Labs based on their decades of research into photonics and micro-fabrication. Quantum cascade lasers are highly advanced semiconductor lasers which produce in the middle to far Infrared part of the visible light spectrum and were pioneered by Jerome Faist, Federico Capasso, Deborah Sivco and Carlo Sirtori at Bell Labs in 1994. These lasers exhibit quantum phase transition effects, making them ideal for use in optics applications. Because they operate at relatively low temperatures, they also have excellent electrical characteristics and are well suited for use in solid-state electronics. 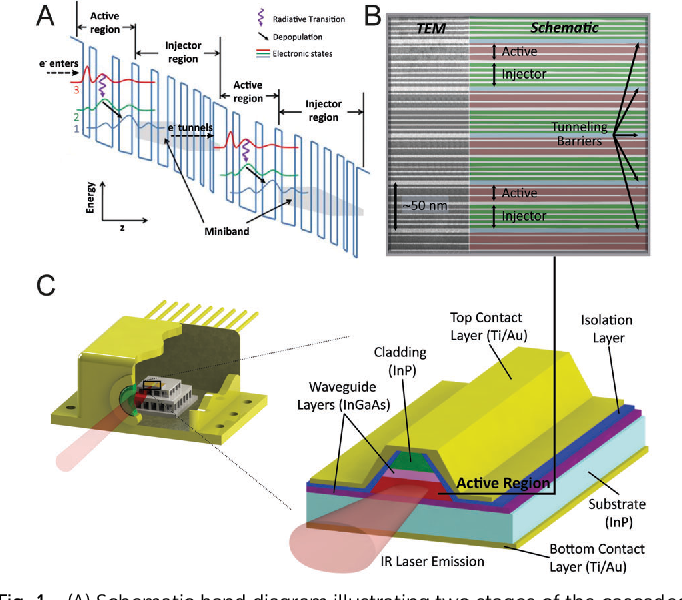 The invention of QCL made it possible for detectors and lasers to be coupled together in ways that had never been done before. Since these two technologies can be used separately without damaging one another, this allowed researchers to put detectors on very sensitive parts of an instrument while leaving the lasers on. For many years, detectors and lasers worked in isolation. They could not be connected until the flow circuitry was designed. This meant that even though two very expensive pieces of equipment, a cavity receiver and a cavity transmitter, were being used, the integrity of the system was never threatened.

What are Some Applications of QCL Devices?

Quantum cascade laser devices and detector systems have been used in applications including biomedical imaging, optical microscopy, applied physics, cryogenics, solid-state electronics, astronomy, and energy. They are used in a variety of devices, ranging from simple sensors that send information back to a processing chip to highly sophisticated devices used in solid-state electronics and microcircuit production. They can measure the amount of time it takes light to travel through a material to determine the thickness of a material. They can also measure the electrical charge of atoms or electrons. And they can measure the amount of "real" energy present in atoms or molecules.

The research community has learned a great deal from the applications of these devices. For instance, QCL researchers have found a way to use them to create microfabrication tools that are more efficient and provide a more cost-effective solution to manufacturing process improvements. Researchers have also developed a technique to use QCL to control processes inside of metals which has enabled them to design better seals and pumps for refrigeration lines, change the hardness of metals at the nanometer level, create a type of paint that is environmentally safe, and enhance the energy efficiency of cooling towers. All of these developments have enabled researchers to study new mechanical properties of all kinds of objects and develop new materials for manufacturing.

Researchers are particularly interested in using QCL in optoelectronic fibers. Researchers have developed a way to control the fiber alignment by placing different concentrations of QCL on the fiber's surface. This technique has the potential to allow for much tighter interfaces between optoelectronic fibers and other materials. In addition, QCL fibers may be used to create devices with finer structure and increased bandwidth. The ability to fine-tune devices will enable researchers to develop new, thinner and lighter electronics.

Researchers have also explored the use of QCL in photo-sensory and photo-electric microscopy. It has been shown that QCL, when introduced at the tip of a microcavitation tube, causes the electrons in a sample to split and travel in different paths. These split electrons emit light in a specific frequency when exposed to the QCL. This experiment has shown photovoltaic applications for material detection, energy conversion, motion detection, illumination and exciting therapy.

Researchers are currently exploring methods to use QCL on a larger scale. They have developed a process that involves placing QCL fibers onto a substrate, cooling them to nearly absolute zero and then injecting them into a conventional substrate. The cavitation process releases the energy in the cavitation tube that can then be used for absorbing and emitting light. Other experiments include using this technology to form thin films and nanowires that exhibit optical, electronic and molecular properties that have not been accomplished before.