What is Germanium and What are its Applications?

How do Researchers Use Germanium?

Researchers have also found many other interesting properties of germanium. For example, they have been able to use this metal in place of lead in semiconductors because the two elements are able to produce electricity when put in contact with each other. They have also found other ways in which germanium combines with oxygen, creating a compound called Oxygenated Germanium (ONG), which creates a positive charge that makes up a large part of the material's nucleus. Other applications for germanium include forming a layer of low-density silicon within quartz crystals, which is capable of achieving great strength and stability.

Below are just some of the Germanium Substrates that we carry.


Some Specs of our Electrical Grade Germanium

What is Germanium (Ge)?

Germanium has been around for millions of years. It is a soft silicate mineral which is used widely in the electronics industry for its ability to conduct electricity. Most people think of germanium when they hear the term 'germanium' associated with computer chips. 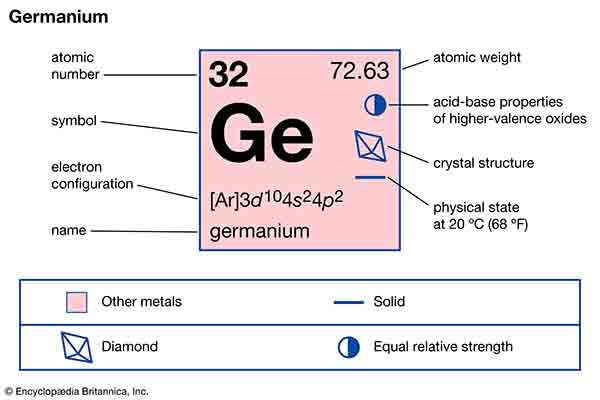 Germanium can be found naturally occurring in a variety of minerals. Some common examples are americium (notably americium oxide) and manganese. In addition, germanium can be synthetically produced by chemical reactions involving bismuth, oxygen, nitrogen, phosphorus and many other elements. The properties of germanium best illustrate its ability to produce high electrical currents: its temperature range is relatively low, and it contains a large amount of radiation with low loss through breakdown.

Its history is closely tied to the history of semiconductors. Germanium comes from a combination of elements with high electrical conductivity and the ability to form a thin film. During the early days of the semiconductor manufacturing process, germanium compounds were used to improve the performance of semiconductors. However, they also had other applications as well: During the 20th century, they were used extensively in motion detectors for automobile navigation systems. After that time, other applications began to develop, with the development of new materials which combined the unique properties of germanium with others, such as silicon, to create new all-purpose materials.

Initially, the main way that germanium compounds were used was in the construction of semiconductors. They combined with certain other elements to increase their electrical current stability, and their low-weight and high-quality construction allowed them to be used in thin-film photovoltaic cells. Today, nearly all the semiconductors in use are based on germanium technology. The reason for this is because they combine the properties of both silicon and germanium to bring about enhanced power conversion efficiency, and increased device life. Additionally, by using small amounts of these two elements, the current stability of semiconductors can be improved, resulting in further miniaturization of electronic components.

With the continued miniaturization of electronic devices, the need for additional, less expensive material was needed. In order to address this issue, the composite material known as Silicon carbide was developed. It combines many of the characteristics of germanium with those of carbon, while still maintaining the properties needed for electrical conductivity, weight, and durability.

As part of the effort to improve human health, the properties of germanium compounds have been used as catalysts in medical applications. These catalytic reactions occur when an external current is applied to a series of exposed, negatively charged chemical bonds. The existence of a charge provides a logic for the reaction, as some types of bonds will be negatively charged while other types will be positively charged. This chemical reaction then causes the electron in the bond to move between the two substances, creating energy needed to create a motion in which the electron can transfer to a higher or lower state of a substance's molecular structure. This results in a chemical reaction that produces energy and often yields a change in that substance's physical or other characteristics. For example, many chemical reactions commonly used in laboratories' chemistry labs commonly incorporate the use of a germanium catalyst.

Germanium compounds have also found applications in other fields, including medical applications. Because the germanium used for catalyzing chemical reactions is similar in structure to a human hair, many medical applications make use of the infrared (IR) spectroscopy, which can detect the presence of germanium in solid materials. This helps doctors diagnose eye problems, detect eye tumors, and monitor the eyes of patients undergoing surgery. These medical uses of germanium are only the tip of the iceberg; research has discovered that these compounds have many more potential applications in the field of electronics.