A photomask is an opaque plate with holes or transparencies that allow light to shine through in a defined pattern. They are commonly used in photolithography. Lithographic photomasks are typically transparent fused silica blanks covered with a pattern defined with a chrome metal-absorbing film. Photomasks are used at wavelengths of 365 nm, 248 nm, and 193 nm. Photomasks have also been developed for other forms of radiation such as 157 nm, 13.5 nm (EUV), X-ray, electrons, and ions; but these require entirely new materials for the substrate and the pattern film.

Send us your specs today for an immediate quote!

Get your Quote FAST!

A researcher asked for the following:

Patterned Area: 19mm x 19mm Pattern: Concentric Circles Height: 50μm Line width: 25μm Period: 50μm master will be used to mold PDMS cured onto a metal substrate for subsequent stem cell/cancer research. For a soda lime, inexpensive but durable – researcher plans on coating the master with a fluorocarbon resist to allow for easy extraction from the PDMS (leaving no residue). Cut in cross-section, the master should look like a square-wave. The resulting PDMS pattern (ie the resulting high sections of the pattern), when exposed to cells in cell culture will be as flat as possible. 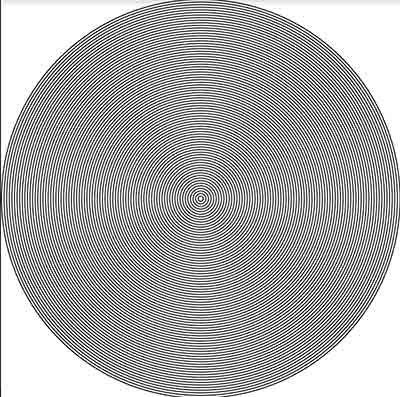 This is a chrome on glass photomask. The pattern is etched into the chrome surface.

This is for a photomask. The original request for quote suggested that you required a photomask that would be used to create a mold.

Because it is a photomask, the depth of the etching is normal for a photomask – just 120nm thickness of chrome.

What Are Some Photomask Applications?

Photomasks are placed on printed circuit boards, where they transmit precise images of the arrangement of integrated circuits to the printed circuit board. Photomasks used in the manufacture of integrated circuits are usually made of chrome layers deposited on quartz or quartz plates and then patterned by a photolithographic process. For each successive layer, different photo masking is used, and the material is deposited or removed in places that are not covered by the photOMask image. [Sources: 2, 3, 9]

Each layer typically has one or more design rules associated with the specific layer created by the mask layout file. Each polygon in a layer can be converted into a mask pattern file, which is a layer of an integrated circuit. DRC tool creates an output file that contains a list of identified rule violations, typical of most mask and pattern generators. A grayscale application known as photOMask (or photomask pattern generator, or even black and white mask generator) requires data that has the potential to be more detailed than the data available in a normal mask pattern generator. [Sources: 8, 10]

In this respect, the method for creating a three-dimensional structure consists of a binary halftone photomask that provides a photoresistic layer that covers the wafer. Next, a mask, defined as a variable intensity shade of gray, is transferred to a wafer coated with a thin film of photoreceptors (a type of silicon photovoltaics). This light is transmitted by a laser to produce three-dimensional aerial images. [Sources: 10]

This material is sensitive to ultraviolet light, which is normally used for the exposure of photoresists. A glucose sensor in a contact lens is embedded with a binary halftone photomask to demonstrate the sensitivity of the photomask to a wide spectrum of wavelengths of light (Fig. 1). [Sources: 4, 5]

When a BHT photomask is used to create three-dimensional microscopic structures, it is possible to create a smoother and more linear profile in the object to be created. [Sources: 10]

If subpixels 21a and 21b are arranged on a plane and the gray plane has an associated plane, the open area of a single cell can be changed if a correction of the nonlinearity of the process is required. A separate photomask can contain a list of all compounds and contact layers that are formed by the diffusion step in the manufacturing process. Therefore, the mask layout files may contain one or more polygons drawn on the polysilicon layer that have not been explicitly shown, even if they are not explicitly shown. Photomasks can also be used to create features, dimensions and masks in a layout file that are compared with the design rules and technology files. For example, the photomask files may contain photomsks used to form polysilicon gates in an integrated circuit, or a separate photomask file may contain photomyzen photomenes used to form a polysilicon gate for an integrating circuit. [Sources: 8, 10]

A transparent photo mask is a template that is transferred to a photosensitive polymer known in lithography as photoresistent, which is called photoresistent polymers by photoreceptors. The empty binary photo masks are preferably standard photo masks made of chrome or quartz, coated with a layer of photoresist (51). [Sources: 7, 10]

The mask layout database is then converted into several photomasks, also known as mask reticles, which can be used to map the integrated circuit. In step 110, the photomask data file is used in the lithography tool to create the photomask layer of the integrating circuit (110). [Sources: 8]

The size of the photomask is not tied to the wafer size; for example, if the lithography tool is exposed to a 300 mm by 200 mm wafer, a 6 inch photomask can be used. In this respect, the three-dimensional structure consists of two layers: a hole pattern and a layer of photomask lying on the surface (essentially linear surface), which corresponds to binary (semitone) photomasks generated by light aerial images. The pattern of a photomask must be demagnetized and thus projected onto a surface with a diameter of at least 1.5 mm. In general, hole patterns on awafer often have an almost circular shape and are the same size as holes in a single layer (2.2 mm x 2 mm) or larger (3.1 mm). [Sources: 0, 1, 9, 10]

You will understand that the threshold and dose of light exposure can determine the photoresist layer used in the photolithography process. It can be used for simple description to describe the elements and the features shown in the figure. [Sources: 6]

In traditional optical lithography, a fully resolved pattern is etched onto a binary photomask and transferred to the wafer by exposure with an exposure tool (e.g. stepper). When used with a lithographic tool for wafers, the light pattern transferred by the photomask is applied to the photoresist film of the silicon wadding. A thin absorber layer is placed on the substrate, which can block the exposure of light with the wafer lithograph tool. The holes in the pattern are designed to absorb a light dose of up to 1.5 micrometers (0.1 micrometers) per second. [Sources: 0, 9, 10]