GaN - based LED wafers that grow on an LSat substrate and Ga - n N based LED wafers that grow on L-Sat substrates. GaN-based LSAT - substrate - grown GaN N LED chip with an efficiency of 40.2%, which is significantly higher than the current standard of 30.5% for traditional GaMn-2-based LEDs. The average power consumption of a typical GaSn - 3 nm - size GaL-3 nanometer - scale GaR-1-nano LED is 40 - 2% - which corresponds to the average power of the standard GaW-4 nm - size GaCnN) -based LED. This is partly because the traditional GaN base LED has to be made of another material such as silicon or silicon carbide and not of a silicon substrate. [Sources: 9, 10]

Get Your GaN on Si Quote FAST!

We have a large selection of large diameter GaN on Si wafers. Please let us know if you can use the following, or if you need another spec and quantity. 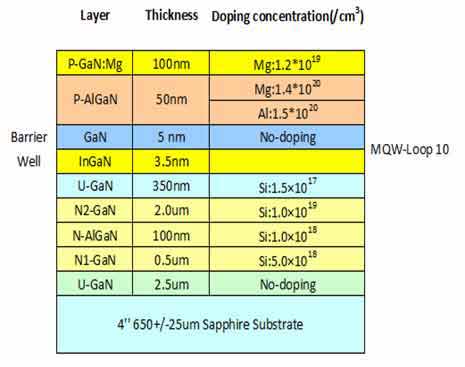 Silicon Carbide and Sapphire (Al2O3) substrates have and are currently used as a base material to make Light Emitting Diodes (LEDs).  Both SiC and Al2O3 wafers are far more expensive than silicon wafers.   This has slowed the adoption of LED lighting in residential and commercial lighting.   UniversityWafer, Inc. now can grow Gallium Nitride (GaN) on lower-cost silicon wafers. Not only does the lower priced silicon save manufacturers on material costs, they can utilize the same semiconductor equipment used in current silicon wafer fabrication.   This can save the fab a whopping 75% costs over Silicon Carbide and Sapphire.

Gallium nitride (GaN) is a semiconductor composite material that has proven beneficial in a wide range of electronic device applications, such as LED luminaires. It has established itself as a widely used semiconducting material in electronics and many other areas of technology. [Sources: 7, 8]

Demand for gallium is forecast to increase as the general lighting of incandescent and fluorescent lamps shifts to light - light-emitting diodes (LEDs) - and the MOCVD reactor market could be affected by the rise of semiconductor-based devices such as solar cells and solar cells. According to a research report by IHS Isuppli entitled "Q2 GaN LED Supply and Demand," more than 100 billion GaN LEDs were shipped in 2016. LED Power Electronics (RF) products, the majority of Ga nN and its Ga N substrates keep a lot of promise. [Sources: 3, 7, 8]

RT, LT and PL measurements were taken to estimate that GaN-based LED wafers account for 79.0%, indicating excellent optical properties. RT / LT / PL measurements were performed on a Ga nN silicon wafer estimated at 40.2% - which is the average of all Ga N based LED chips based on LSAT substrates. We also talk about GaN silicon because it provides a way to reduce the cost of LEDs, just like silicon semiconductors, but it is much thinner and cheaper to grow than LEDs grown in sapphire (sic). At just 2.5mm, it is much thinner and cheaper than an LED device and has great potential for use in a variety of applications. [Sources: 0, 1, 8]

LED wafers are based on highly efficient organs and are grown under optimized growth conditions. SEM and AFM were investigated and the cultivation of the GaN-based LED wafer on LSAT substrates as shown in Figures 4A and 4B respectively. XRCS for the performance of Ga nN-based LED wafers growing on an LSat substrate and for the growth of as - cultivated - on - a - wafers on Ga N silicon and sapphire (sic) substrate. [Sources: 0]

This system can also include epitaxially grown gallium nitride (GaN), which can be used in the production of silicon wafers for a wide range of applications. In the following examples, illustrating different embodiments of the disclosure, the gallium nitride wafer is directly bonded to the silicon wafer. [Sources: 5, 6]

The GaN is a free-standing, translucent substrate with a diameter of 2 inches and a thickness of 180 micrometers. LED devices are made from typical materials with 2.4 diameters, but many researchers are trying to prepare GaN-based LED wafers for the production of powerful, low-power and low-cost LED components such as LED light bulbs, Lialo lamps, etc. 8.10k shares (CTE) is not in line with Ga N, a more dramatic cost reduction can be achieved by growing Ga n based LEDs on silicon waves, which have the advantage of being readily available and cheaper than other materials. [Sources: 0, 4, 6, 8]

The gallium nitride and silicon wafers are in use, but are not bonded together by a bonded surface. The silicon does not reflect, meaning that the light generated by the GaN LED on it is absorbed into the wafer and thus wasted, resulting in a low overall effect. One of the problems to be overcome in the production of high-efficiency GaN LEDs - LEDs mounted on LSAT substrates - is the lack of a high-quality, transparent substrate for use in the manufacture of these devices. [Sources: 0, 6, 9]

In previous work 22 we have just reported the first GaN - based on wafers - on - one - chip (wafers) with a high quality, transparent gallium nitride substrate. TEM was introduced to evaluate the performance of LED wafe chip-based growth methods. We have made several measurements to investigate the efficiency of both GaN-based cultivated and non-growing temperature-resistant LEDs at room temperature. The key to highly efficient organ-based LEDs is the use of a transparent substrate for the production of Ga N-based devices on LSAT. [Sources: 0]

The research team has also demonstrated the ability to control indium gallium nitride (InGaN), which is carried on the same platform. To study the performance of GaN-based LED wafers on a high-quality transparent sapphire substrate, we used a modern growth mode abbreviated as AGOG - nano-patterned SAPPHIRE substrate. This system is used to anneal gallium oxide nanoparticles (AGO), which are then deposited on a 150 mm long sappy substrate to deposit the gallium nitride Ga-N film, a critical process step required for advanced LED manufacturing. LEDs (light emitting diodes) in the form of a transparent, non-growing and temperature resistant growth mode with GaBabbleviated. [Sources: 0, 2, 8]

AIXTRON SE announced today that Transphorm Inc., a US company, has acquired the development of the world's first GaN LED silicon wafer. LED technology, based on disruptive GaN silicon technology, has transformed the shape, function and performance of luminaire design. Epistar and Azzurro Semiconductors have announced that the former transferred its existing structure, led by gallium nitride (GaN), to Si wafers in just 16 weeks. Today, the two companies behind the first silicon-based technology announced their partnership to make it available for commercial use in the near future. [Sources: 5, 7, 13, 14]

LED chips in a standard process22-23, we have produced and prepared a GaN-based LED wafer and for the production of high-performance, low-cost LED chips. [Sources: 9, 10]

Manufacturers can use the same semiconductor equipment used in the current silicon wafer manufacturing process. GaN - silicon LED is cheaper than LED made of sapphire [sic] and uses a much thinner layer with only 2.5 mm. The gallium nitride on the silicone wafer is not bonded by a bonded surface, but is a cheaper silicon. In fact, a silicon wafer LED can be bedded for $40, compared to $1,500 for sapphire, due to the lower cost of silicon and its smaller surface area. [Sources: 1, 4, 10]

A more dramatic cost reduction can be achieved by growing GaN - LEDs on silicon wafers that have a higher, lower cost than compatible semiconductors. The possibility of redirecting production facilities to accommodate the transition to Ga N silicon LEDs is generally accepted as requiring minimal investment. Growing Gan on large, cost-effective silicone wafers that are compatible and cost-effective can deliver high quality, high performance and high performance LED products. [Sources: 2, 8, 11]

GaN silicon is promising because of its low power consumption and low emission properties. The future of the LED market could well influence the prospects of GaN - silicon power supply technologies. [Sources: 11]

The Bridgelux engineers also say they were able to design an eight-inch GaN-Si wafer without cracks, the same standard as sapphire and lower the price of LED lighting. The 8-inch wafers are usually the standard for volume production, but a 6-inch silicone wafer can grow nine times as many LEDs. The company estimates that 95 percent of GaN LEDs are manufactured on the 8 "wafer, while only 1 percent are manufactured in silicon wafers. This will take away the "sapphire [sic] waffers" market share, according to a recent report from Gartner. [Sources: 3, 6, 11]

Although Epistar has not announced any plans to produce GaN-Si LEDs, the research project is remarkable. Companies that make LEDs with a focus on GaN silicon include Toshiba, which bought Bridgelux technology in 2010 as part of a $1.5 billion acquisition of the company's electronics business. [Sources: 7, 11]

In addition, the new LED technology is compatible with both silicon and CMOS technology and is manufactured in existing large-scale silicon foundries. Another feature of using a silicon substrate is that LED multi-connectors with silicon substrates and circuits can be integrated on a single chip. The project will accelerate Plessey's efforts to develop its innovative LEDs at a manufacturing site in Devon. Translucent is being developed in collaboration with the Department of Electrical Engineering and Computer Engineering at the University of Bristol. [Sources: 5, 13, 14, 16]

LED manufacturers to research and build on the sapphire and silicon carbide wafers that are widely used today, "Epistar added. LED manufacturers have been researching the use of silicon as silicon wafers for several years, as used in the industry for silicon technology. However, the silicon is not reflective, which means that the light generated by GaN LEDs sitting on silicon is not reflected. The wafers are absorbed into the wafers and wasted, resulting in lower overall efficiency. This has led to concerns that the increasing use of silicone wafers will trigger a shift in industry towards GaN instead of silicon for the technology, and vice versa. [Sources: 3, 7, 17]