What are Silicon Biosensor?

What Silicon Wafers Should Be Used to Fabricate Biosensors?

A researcher requested the following:

Our lab fabricates our own SPR chips (Au coated microscope slides) to use in our custom SPR biosensor. To fabricate these chips, I have been taping microscope slides on used 4" silicon wafers in order to mount them in a CHA Mark 50 E-beam evaporator. To maximize our production, I am interested in purchasing more wafers. They do not have to be made of Si since I am only using them for mounting purposes. Therefore, I was wondering if University Wafer can supply us with more 4" wafers at a low cost or can they recommend their cheapest 4" wafers for purchase? Below, I have attached the allowed wafer materials to be used within our evaporator and an image of how I am mounting the slides onto the wafer.

What Materials Used in an Evaporator?

The following can be used in our researchers evaporator and the image shows how the scientist mounts the slides onto the wafer. 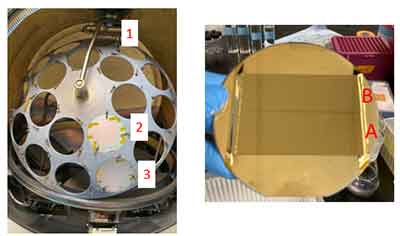 What are The Mechanisms of a Silicon Biosensor?

surface. This type of biosensor is made of silicon and consists of a Fabry-Perot fringe pattern and is capable of detecting molecules ranging from a single atom to a zillion. In this article, you will learn about the mechanisms of silicon biosensors and how they work. Once you have understood the principles behind these devices, you can go on to apply this technology.

What are Some Examples of Silicon Biosensors?

One type of silicon biosensor is a microcavity. The microcavity contains a thin, luminescent p-Si layer inserted between two Bragg reflectors. When the p-Si surface becomes oxidized, narrow luminescence peaks are detected. A similar technique was used to develop a DNA biosensor. This technique involves immobilizing cDNA strands in a porous surface, exposing the pore to the complementary strand of DNA. In this method, a red-shift in photoluminescence is observed after exposure to cDNA.

As silicon-based devices are characterized by highly developed microfabrication techniques and fast surface functionalization strategies, they have great potential for point-of-care medical diagnostics. Another type of silicon biosensor is silicon-based integrated optofluidic label-free biosensing, which relies on efficient interactions between an evanescent light field and bound analytes. There are three main types of silicon biosensors:

Silicon biosensors are widely used for routine monitoring of glucose, oxygen and pulse rates. They can also be used in smart watches to detect physical activity and other factors. Among other uses, biosensors are also essential for drug discovery, food and water quality monitoring, metabolic engineering and biodefense. They are also useful for monitoring blood components and other biomarkers. It is important to understand the characteristics of biosensors before using them.

The resulting biosensors are very sensitive. The biosensors are highly versatile and are capable of high-throughput screening. Examples of silicon biosensors for DNA samples have been demonstrated. These devices are designed to detect both high-level and low-level metabolites. Further research on biofunctionalization and integration of light sources is currently underway. In addition to biosensors, silicon technology can be used to produce a single-chip optical biosensor.

The pore size is also important. The nanoporous silicon used in these sensors is a good nonpolarizable reference electrode. It allows PlyB221 endolysin to flow through the sensor. It prevents other bacteria from penetrating the membrane. Both kinds of sensors were tested three times, enabling the researchers to determine their efficacy. The results of these tests were similar.

What is a Silicon Biosensor's Mechanism of Operation?

The basic principle behind the silicon biosensor is its ability to convert biological analytes into a signal. This biosensor is composed of two components: a silicon sensor and an enclosed buried oxide. The sensor's sensitivity is based on its ability to measure peaks linearly related to the concentration of the target DNA sequence. It is able to measure multiple analytes in a single device.

The silicon biosensor works through a chemical reaction. Its sensitivity is enhanced by the application of FRET to detect the 16S rRNA. The fabricated biosensor displayed a linear response to the target DNA in the concentration range of 0.25 to 10 mM and a LOD value of 328.7 nM. Moreover, the biosensor has the potential to detect many other biological molecules.

To produce a reliable biosensor, silicon has to be porous. Pore-size distribution is crucial for the biosensor. For example, p-Si derived from p-type silicon substrates is mesoporous, which can immobilize biomacromolecules. On the other hand, n-type silicon is macroporous, which means that it can accommodate larger molecules.

The most widely-used approach involves the exploitation of the thin native oxide that forms above the silicon surface in ambient conditions. In this way, organic molecules are grafted via a stronger SiC bond, which makes its electric properties more predictable. This makes the interlayers highly attractive for biosensor applications, though their complicated functionalization procedures have hampered their development. Therefore, new techniques are needed to develop a silicon biosensor.

High-sensitivity silicon biosensors are necessary for the field of biotechnology and medical diagnostics. In particular, label-free lab-on-chip biosensors are emerging as an option. Hydrogenated amorphous silicon photonic resonators are a promising photonic platform for biosensor applications, ranging from point-of-care testing to biotechnological screening. This work is progressing rapidly, but further improvements are expected.

Another strategy for developing silicon biosensors is to develop highly ordered monolayers on the surface of the sensor. These monolayers may serve as an interlayer between the bifunctionality of the sensor and the silicon surface. For this purpose, robust protocols must be developed. This strategy may also apply to other materials, such as polyimide films. The next step in developing silicon biosensors is to develop a robust and effective functionalization strategy.

What is a Fabry-Perot Fringe Pattern?

Fabry-Perot fringes are characteristic of biosensors that detect changes in biomarkers. A biosensor can be developed by applying a Fabry-Perot pattern to a porous silicon substrate. The Fabry-Perot fringe is a pattern formed on silicon surfaces that exhibits both photoluminescence and interferometric signal transduction. The researchers have developed a silicon biosensor with this unique dual optical property. The sensors were prepared by electrochemical etching of p-type silicon under illumination of a 300 W tungsten bulb.

The silicon diaphragm is supported in a peripheral collar that is surrounded by a transparent cover plate. The diaphragm and the collar form a cavity and are held in a parallel spaced-apart relationship. The diameter and spacing of the diaphragm and plate are similar, usually 1 micron apart. The thickness of the diaphragm can be varied to suit various pressures.

The Fabry-Perot fringe pattern can be used to detect biomarkers by monitoring changes in biomarker levels. A Fabry-Perot fringe pattern is a unique pattern created by a combination of a transparent cover plate and a resiliently flexible diaphragm. The diaphragm is thin and flexible, and it provides a reflective moving element. Its movement relative to the plate changes the intensity minima along a wavelength scale.

This optical etalon can be created with a fiber end mirror or a movable mirror. The moveable mirror has the role of compensating the thermal effects experienced by the EFPI. The fiber sensor is able to achieve a pressure measurement resolution of 0.1mmHg and a frame rate of 100Hz. Its performance has been evaluated on a cardiovascular simulator and a urodynamics application.

The Fabry-Perot fringe pattern was first developed for the detection of DNA-damaging compounds in the blood. It is useful for monitoring the effects of endocrine disruptors. For low-level enzyme activity, an interferometric biosensor can be used. The biosensor was made of porous silicon with a heavily boron content. Upon the addition of b-galactosidase, it changed the refractive index of the test medium.