What silicon wafers can be used for P N Junction research and production?

I have a quick question about the solar wafers vs the silicon wafers; when solar wafer is designated as n-type wafer or p-type, being Solar wafer does it imply that a p-n junction is already grown or is it bulk p or n type wafer, and how’s that different from silicon wafer? I am looking to start order with small qty: ~25 wafer

What Silicon Wafers are Used for P-N Junction Research?

I am looking for pn junction wafers for my project and I saw some solar wafers listed on University Wafer’s website (Solar 150mm (universitywafer.com)). Do you happen to have more information about these wafers?

We are looking for n-on-p type Si and GaAs wafers. The size of the wafer is flexible. We will only need a small amount (<5 wafers). Let me know if you need additional information.

Q) Is it possible that you can cut (dice) it into smaller size for us?

A) Yes, we can dice the wafers or laser cut them. We need to know the dimensions and quantity needed.

What is a PN Junction Diode?

The p-n junction is a semiconductor that is positive and negative. The n-type electrons are paired. The p-n junction is the smallest conductive semiconductor. The n-type electrons are in charge-neutral. This makes it possible to create high-efficiency devices with a low-power consumption. A positive polarity enables a low-power device. The other type of n-type transistor is a refractory metal.

The first type is called the p-n junction. The negative terminal is a semiconductor with holes. The holes attract electrons while the electrons flow away from it. The cathode and the anode terminal are connected to one another by the anode. The positive and negative polarity in a p-n junction are opposite in nature. The n-type semiconductor has a broader depletion region, which prevents a current from flowing through it.

In addition, there are different kinds of p-n junctions. In the former, electrons from one polarity diffuse toward the other, while holes from the opposite side migrate toward the other. This means that the p-n junction is a good place to study electrochemistry. This area is characterized by an extremely high electrical resistance, resulting from its high degree of dielectric remanence. A negative polarity is also known as a refractory zone.

The p-n junction is a fundamental component of semiconductors. Its intrinsic concentration is n, while its negative ion is p. The reverse ion is n. The depletion region is a conductive element. In the p-n junction, the electric field is reversed. In the n-type, the positive ion is connected to the negative ion.

What Are the Modes of Operation of a PN Junction Diode?

PN junction diodes operate in two modes, namely, forward bias and reverse bias. The former is characterized by a slowly increasing forward current while the latter increases dramatically with the increase in external voltage. On the forward bias curve, the p-type is connected to the negative terminal and the n-type is connected to the positive terminal. The reverse bias produces a sharply increasing forward current.

A PN junction diode can be operated in one or more of these modes. Each mode will have a different effect on 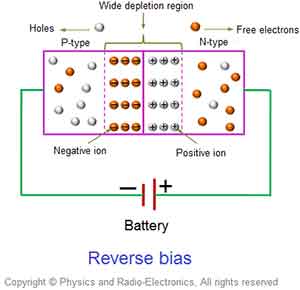 the voltage. In the photoconductive mode, for example, a voltage is applied to the n-type side of the diode. In this mode, a photocurrent is generated in the p-side, and a negative current is created on the n-side. This leads to a concentration gradient between the two sides of the junction, resulting in a current.

In the reverse-bias mode, electrons spread away from the PN junction. This results in the emission of the minority carriers, which cause the PN junction to become open. Consequently, a large number of positively charged and negatively charged ions are produced on the N side of the junction. This creates a net positive and negative electric field in the region near the metaphysical junction.

When the p-type region is flooded with electrons, the negative-side hole region is depleted. During the reverse-bias state, the negative-side charge carrier will repel the p-type charge carrier. The reverse-bias voltage will result in a narrow depletion zone. A small amount of current will flow in the depletion-zone, while the majority-type end of the diode will be fully charged.

A researcher asked for the following:

I would like to know the prices and minimum quantity. I’m setting up a new students lab and need a pn junction wafer. I don’t have experience in these kind of orders so any help is appreciated.

Can you please send me more information about these wafers? Thickness of the diffused layer, etc.

The the most popular entry wafer for Solar Cell construction is with a diffused layer of opposite conductivity type, with created p/n junction. Thickness of the diffused layer 1-10um.

What is a Diffused Layer?

According to the IUPAC, this is a region near the electrode where concentrations are different from those of the bulk solution. Diffusion of ions in the air is one example of a diffused layer. Here are some examples of diffusion layers and their definitions. Read on to learn more! And don't forget to check out our article on ion size diffusion.