Get Your InGaP Quote FAST!

InGaP is used in optics and microelectronics. Its most common form is as Indiun Tin Oxide. Solar cells are made of thin films of Copper Indium Gallium Selenide. InGaP is a semiconductor and is used for high-performance devices. There are many uses for Indium Gallium Phosphide.

Please send us your specs and quantiy for immediate quote!

InGaP is a compound semiconductor. The materials used to make the substrate include indium, gallium and phosphorus. InGaP has a superior electronic velocity than traditional substrates. It's structure is great for high-power and high-frequency electronics applications

InGaP is very difficult and expensive to make. But there is another solution. We can deposit InGaP epi layers onto Gallium Arsenide (GaAs) and Gallium Phosphide (GaP) wafers.

This can save you time and money.

Please send us your specs and quantity today.

The surfactant component provides the source of gallium, and the team says they have added the hydride vapor phase epitaxy reactor. [Sources: 6, 9]

InGap Wafers, "a new paper in the Journal of the American Chemical Society (JACS) on the use of gallium oxide as a surfactant component. [Sources: 0]

The first band gap - the smoothing of the transition range - can consist of sorted indium gallium arsenide (GaAs) and the second n-type doped semiconductor, which forms the collector region. There are a few silicon hybrids, but the first transition regions can be composed - graduated indium gallium arsenide or InGaAsN. The first n-type doping semiconductors that form the emitter region, GaN, can be made from GaA and In Ga and a variety of other materials such as silicon, silicon oxide and silicon wafers. InGapWafer, "The first N-type doped semiconductor, formed from an emitter and collector region of a GaO-2 doped silicon oxide hybrid, can consist of two different silicon hydride types and one or more different types of gallium. [Sources: 2, 4]

Galliphosphide is the most mature material and is used in large quantities in commercial applications. NMOS transistors, including the metal that can be used as a gate electrode, and the side wall spacers that can form a carbon-doped silicon nitride. [Sources: 0, 10]

Indium phosphide wafers are suitable for this purpose due to their characteristic resistance to cosmic rays, which has already been cited for indium. They can also be used to produce high-power semiconductors such as photovoltaic cells, and they are also used to produce a wide range of diodes, including lasers and LED diodes. [Sources: 2]

Multiple compound cells exceed the efficiency limit of individual compounds by converting areas of the spectrum into three equal parts, which is done by separating gallium indium phosphide and gallium indiphosphide from the solar spectrum by absorbing three equal parts. This makes them more efficient than single crossings, but still not as efficient as a single cell. [Sources: 2, 7]

The band gap energy is made available to the collector region, which comprises the area of gallium indium arsenide nitride (P-doped) and the intermediate base region (16%). This consists of a p-doped (p) doprene (1,2,3,4-tetrahydrocannabinol) compound and p-DOP (1,5,6-thiocyanin) compounds trapped in the base - region-16. [Sources: 4]

The gallium arsenide phosphide (abbreviation GaAsP), which has a p - doped (p- preferably at a z of 0.48), is overcome by the waveguide layer-16. The emitter layer (110) is an n-like layer consisting of indium gallium arsenide InGaAs, which is doped with an N-type doping agent such as silicon. This composition with a 1,2,3,4-tetrahydrocannabinol (1,5,6-thiocyanine) compound preferably forms the lower SCH of layer 106. It is overcome by level 14 and overcomes the wave conductor in level 16, where u is about 0.83. [Sources: 5, 8, 11]

The present invention applies an exemplary NPN-GaAs-HBT (100), as exemplified by the H BTB-100, to a high-performance, low-cost and ultra-efficient gallium arsenide InGaAs wafer. The NNPs (PNP-HBTs) consist of two layers of indium gallium arsenide (Ga asP) and one layer of InGAAs (InAsP). [Sources: 8]

There are a number of interesting methods for producing indium phosphide InP wafers, but the approach used is to form a grid that corresponds to the InGAAs base, so that more indium can be incorporated into the base region without misshapen or warping. InGaAs substrates with a high-performance, low-cost and ultra-efficient gallium arsenide wafer. [Sources: 2, 4]

Passivation steps are performed with the help of electron cyclotron resonance plasma (ECR) to deposit a silicon oxynitride layer. The epitaxially deposited silicon alloy is doped with gallium arsenide and a layer of indium phosphide oxide (InP) in a high temperature, low pressure environment. [Sources: 0, 4]

The barrier layer is then formed in the lower SCH layer (106) and the cell growth substrate is removed. The cells are then grown on the gallium wafer, which then turns out to be attached to a slender metal foil handle. In step 410, the emitter layer 110 is formed with a spacer layer 108 and can consist of either indium gallium phosphide (InGaP) or quantum alternative. This transistor comprises a base region that continues to consist of doped indiamine arsenide and gallium arsenide nitride in a high-temperature low-pressure environment, as well as a layer of InP. [Sources: 4, 7, 8, 11]

What is Indium Gallium Phosphide (InGaP) 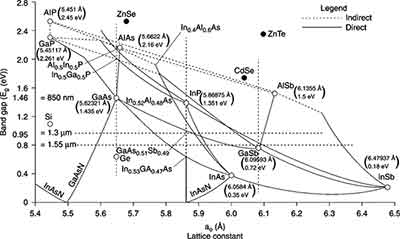 Indium gallium phosphide is a semiconducting material made from gallium and indium. It is used in semiconductor devices, optical fibers, solar cells, and lasers. It is also used in microelectronics. And it is also used in optics, where indium is used in a chemical compound called Indiun Tin Oxide. The name of indium comes from the Latin word indicum, which means "violet".e materials are used for electronics.

Indium Gallium Phosphide is the most popular semiconductor in the world. Its high-quality thin films are made in silicon, a semiconductor. Its conductive properties make it a suitable choice for solar cells. It is used for a wide range of applications, including in telecommunication. When compared with other materials, Indium Gallium Phosphide has a lower refractive index than Silicon, so it is not as efficient.

InGaP/GaAs cells are a relatively new development in solar cell technology. They belong to the III-V group of compounds, and are also referred to by their Roman numerals. InGaAs is a semiconductor made from at least two elements, silicon and gallium arsenide. It was discovered by Nobel Prize-winning Russian physicist Zhores Alferov in 2000.

Although InGaP/GaAs solar cells are still far from being a viable photovoltaic solution, it can be made with silicon and other materials. The most important difference between GaAs and silicon is the concentration of light in the cell. A high concentration photovoltaic system will have a much higher conversion efficiency than a low-concentration solar panel.

Another benefit of GaAs/InGaP cells is that they can be miniaturized, which makes them a more feasible option in space technologies. The InGaP/GaAs bandgap is 1.0 eV, which means that they are highly resistant to radiation and thermal fluctuations. They will be a great contender for a long time to come, but there is no other material that has the potential to surpass them.

InGaP/GaAs solar cells can achieve efficiencies of 39.8% or more if the layers are sufficiently thick. The process is also easier than traditional silicon or GaAs solar cells, as the process requires no additional heat. Most InGaP/GaAs cells are grown with metal organic chemical vapor deposition (MOCVD) or electroplating.

InGaP/GaAs cells are extremely efficient. Using InGaP/GaAs solar cells can yield a third of the energy of a conventional cell. However, InGaP solar cells are not suitable for space applications due to their low energy density. As a result, they are best used in solar panels intended for photovoltaics.

The higher J sc, the better. The ratio of GaAs/InGaP cells is ten times higher than InGaAs solar cells. They can be a very effective solar energy source for residential and commercial buildings. The three materials are incredibly transparent and are suited for building use. The InGaAs solar cells have better short-circuit efficiency than their GaAs counterparts.

The InGaP/GaAs tandem solar cell for photovoltaic purposes is a promising candidate in the photovoltaic field. Its combination of GaAs and InGaP has a higher bandgap than InGaAs and is therefore more effective at absorbing light. It has been proven that the combination of the two materials can make a better solar cell.

Researchers have found that GaAs cells have a high sensitivity to light, and that they work best when heated to the right temperature. But, in the case of a solar concentrator, a GaAs PV cell is also a good choice for low-concentration photovoltaic systems. Its increased sensitivity to sunlight makes it an ideal solar energy source.

These solar cells have the highest efficiency among all other types of solar cells. Their spectral coverage is wider and the efficiency is higher than that of other silicon-based photovoltaic cells. InGaP/GaAs photovoltaic cells are a good choice for difficult environments. These materials are also compatible with other types of semiconductors. They have been extensively investigated for their high efficiencies in challenging conditions.

GaAs and InGaP/GaAs materials have been widely studied for their properties. They can also be combined with other semiconductors to form hybrid cells. While GaAs-based photovoltaic cells are currently the most cost-effective, they are also the least efficient. They require more expensive and more complex devices. While these materials are cheaper to manufacture than their crystalline counterparts, they are not as efficient.