What is a Semiconductor & Why Should You Care?

The authors Michael Quirk and Julian Serda is a textbook written to help researchers understand the fundamental technologies that are the base for semiconductordevice manufacturing.

Ask us Any Question! See How We Can Help You!?

From Sand to Silicon - How Semiconductors Are Made

UniversityWafer, Inc. is a leading supplier of Silicon and other semiconductor.

What is a Semiconductor?

The book covers the many challenges fabricating microchips on an enormous scale while celebrating the "conceptual simplicity of semiconductor manufacturing."

Think of a tree trunk growing straight up in a tube. A semiconductor starts as a seed that is grown in a cylndical tube called an ingot. Then that ingot is sliced like bread into wafers, also called substrates. These wafes are what is used to create ICs.

Depending on properties added to the ingot during it's grown, the final semiconductor can either conduct electricity or insulate. 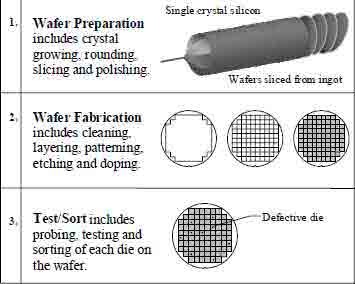 Includes probing, testing and sorting of each die on the wafer

surface before dicing into individual dies. Metal connectioins
are made and the chip is encapsulated.

Electricity is sent through the chip and then it's environmentally tested.

How Did Semiconductor Wafers Come About?

War! The British were boming Germany at night as daylight raids were found to be too dangerous with high loss rates for little to show for it. But bombing at night effectively was problematic as targeting could be off by 5 miles or so. So a new technology was required. The allies were the first to realize the need for a new technology that was first theorized just a decade before.

Luckily for the Allies, the German high command ignored the cries from their scientists and front-line officers regarding the development of the transistor to enhance their radar technology.

“My pilots,” he bragged, “do not need a cinema on board!”

By the time the Germans discovered what the Allies were working on, it was too late for them.

The war ended and the dawn of the computer age and transister began.

Our future one day may evolve into carbon silicon entities to enhance and extend life. And this is just one of many reason you should know and care about semiconductors.