What is Dry Etching in Semiconductors?

What Wafers Are Used to Fabricate Electrode Sensors for Biological Applications?

"We make electrode sensors for biological applications.
We do a dry etch of the surface using evaporated chrome as a mask mask to make high aspect ratio pillar like structures on the surface.

We want to test them with the automatic track coaters to see if they break first- so we just need 5 to start! The specs are the same as the 525um thick ones that I sent you before (we just need 200um thick this time)"

What Is Dry Etching? 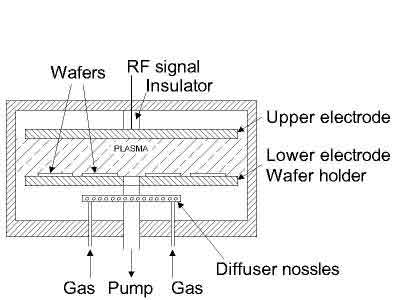 reactions at a low cost. This process uses small quantities of chemicals and electricity to produce high-resolution structures. Manufacturers can gain advanced resolutions by using dry etching instead of expensive photolithography tools. Dry etching has a variety of benefits for manufacturers, including high aspect ratio structures and less expensive equipment.

Reactive-ion etching is a type of dry etchanting used in microfabrication. In this process, a chemically reactive plasma is generated in the presence of an electromagnetic field. The reaction enables the material deposited on a wafer to be removed. A chemically reactive plasma has a high rate of removal. To learn more about this technology, read on.

This method is a physical dry etchant. During the etching process, argon ions with energies of one to three keV are radiated on a surface. The wafer is held perpendicular to the ion beam. This makes the etching process absolute anisotropic, but the selectivity is low, as it is impossible to distinguish between individual layers. The gas and struck out material are exhausted by a vacuum pump. However, this results in particles depositing on the walls of the chamber.

The main benefit of this method is its flexibility and adaptability. This type of etching process enables users to control the etching rate, reproducibility, uniformity, and anisotropicity. Reactive ion etching is one of the most common etching processes in the semiconductor industry. Besides that, it's also the fastest and most versatile method of dry etching.

Reactive ion etching is a method of removing organic material by means of ion transfer. Unlike conventional etchants, ion etching is a dry process, so the RIE process is often preferred for many manufacturing processes. However, unlike other types of etching, it is highly adaptable. Increasing the power of the ICP-RIE reactor helps control the etching rate.

Reactive ion etched materials are extremely hard to clean. Because of the high-temperature nature of this process, the plasma is a risk to sensitive electronics. Therefore, it is important to protect sensitive electronic components from high temperatures and ion beams. In addition, reactive ion etching is recommended for sensitive parts, such as photosensitive devices. The process is also effective for the etching of organic materials.

The main difference between RIE and wet chemical etching is in the use of ions. In the latter, the ions have highly directional properties, which can reduce the need for a wet chemical etching. The ions can be directed horizontally or vertically to achieve the best etching result. RIE can also produce a very wide variety of surface features on a surface.

The rate of SiC etchant is proportional to the percentage of oxygen in the mixture. A maximum etching rate is achieved at about 60 percent of O2 content, where it then gradually decreases. Sugiura et al. found that SiC etching rates were only slightly higher at 40 percent O2 content. The addition of oxygen to the mixture increased the amount of reactive F atoms.

The method of dry etching was developed for power devices made of silicon carbide. It requires a high surface quality and higher etching rate. However, if the substrate is relatively hard, a dry etching process is more effective. A higher DC bias voltage is required to increase the rate of etching. For semiconductor devices, the gas flow rate should be controlled to prevent excessive etching.

The first stage of anisotropic dry etching involves the deposition of a passivation layer, which is chemically inert and prevents the etching of the sidewalls. This layer is sputtered on the substrate after the etching is completed, and is usually C4F8. Without the passivation layer, ions would react with the substrate as they advance deeper into the substrate. This process repeats over again, resulting in small undulations in the sidewalls and isotropic steps.

Another anisotropic dry etching technique is reactive ion etching. This method uses plasma to etch materials and is most suitable for manufacturing nanowire arrays and developing transistor devices, which are widely used in electronic sensors. This process also produces vertical sidewall profiles. However, this technique is not yet widely used due to technical issues. The disadvantages of anisotropic dry etching include low selectivity, and difficulty in controlling CD.

The process of dry etching is characterized by the balance between chemical and physical etchants. Several parameters of the dry etching process can be changed to alter the anisotropy of the etching. The chemical part of this method is highly anisotropic, while the physical part of the process is isotropic. A combination of both chemical and physical etching can produce sidewall shapes that otherwise would not be possible.

Another variation of anisotropic dry etching is cryogenic dry etching. In this process, the temperature of the substrate is cooled to a very low level, typically 175 K, which increases the chemical stability of the silicon oxide film. This reduces the flow of SF6 and oxygen gas, thereby reducing the risk of a chemical reaction occurring. The low temperature also allows the etch floor to be removed without the use of passivating films.

Wet and dry etching are similar techniques for the removal of substances from surfaces. The difference is in the type of material to be removed. Dry etching uses chemicals in the liquid phase, while wet etching requires an immersion tank and a spray system. It is safer than wet etching, and allows greater selectivity. A wet etching process also uses the same chemistry, but the chemical solution is much easier to handle.

The etch rate is constant at 30mT and linear for all power densities between 180mW/cm2 and 320mW/cm2. At higher power densities, the chemistry of gold chlorides may become unstable, thereby impairing the process. This may ultimately result in increased deposition of debris on the sample surface. Further, a high power density may also cause an increase in etching debris on the surface of the gold film.

Reactive ion etching (RIE) is a critical step for the manufacturing of microelectronic devices. This process exposes the surface of the semiconductor to ions, causing damage and surface contamination that can degrade the quality of the material. The etching rate can be increased by changing the composition of the plasma, and the conditions of the etching chamber can affect the process of defect formation.

Another method of anisotropic dry etching is called reactive ion etchanting. Reactive ion etching combines chemical and physical etching to create high-resolution images. It is commonly used in PCB manufacturing, where it can create recesses and forms in the surface. If a pattern is desired, the etched material can be modified by removing excess layers.