What are Organic Transistors?

What Silicon Wafers are Used for Organic Transistor Research?

A Postdoctoral Researcher asked us to quote the following:

I need a quote for 15 unit of n-doped Si/SiO2 wafers with 100 mm diameter and 3,000A (300 nm) thickness of silicon dioxide for fabrications of organic transistors. It is not necessary SiO2 layer on both sides. Please, let me know if you need more details. Thank you so much.

Below are Important Terms Used in Organic Transistor Research

What Are Organic Transistor Benefits?

An organic transistor is a semiconductor that uses an organic material for its channel. The advantages of 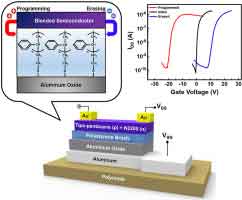 What are OLEDs Luminous Efficiency?

Organic transistors have high luminous efficiency mainly due to their ability to suppress exciton quenching and photon loss. These transistors are made from an array of organic materials, including PMMA, Silicon, and Lithium Fluoride. Their high luminous efficiency makes them a promising candidate for LED applications. The following section provides an overview of the process used to fabricate an OLED. It will serve as a guide for designing an OLED.

The main optoelectrical properties of organic transistors are shown in Figure 2. The thickness of Ag in both devices is 80 nm. The intersystem crossing probability is 100%, which translates into a higher luminescence efficiency. The OLET is about 100 times more efficient than an OLED. The efficiency of organic transistors is also dependent on the amount of charge carrier transport in the device. The two devices have different threshold voltages and have high mobility.

Organic light-emitting transistors (OLEFETs) have the advantage of having a vertical charge transport. The in-plane charge transport is better compared to that of conventional LEDs. In addition, the higher electroluminescence quantum efficiency of OLETs is due to their device structure. The high luminous efficiency of OLEDs is expected to be useful in various applications, from wearable electronics to lighting.

OLETs represent an effective optoelectronic device platform that will enable novel organic photonic display and application technologies. As an OLET combines electrical switching with light emission, it is easy to process and does not produce pinholes or shorts between injecting contacts. Further, OLETs are very efficient and low-cost to produce. Therefore, organic transistors may be a viable alternative for lighting applications in the future.

What Do Organic Transistors Cost?

Organic transistors are extremely low-cost semiconductors that have many benefits. They are fundamental building blocks of digital combinational logic circuits and flip-flops. They are used in modern microprocessors, memory devices, and integrated circuits. They are also extremely flexible, allowing them to function as both a switch and an amplifier simultaneously. In this article, we will explore some of the most common applications of organic transistors.

A major advantage of organic semiconductors is their ability to be easily processed. The resulting silicon-free transistors are compatible with a variety of processing methods. One such example is an Organic Field-Emitter Transistor (OFET), which consists of a conducting polymer, which acts as both a source and a drain, on top of an insulating polymer made of polyester or phenylsilane.

In recent years, organic semiconductor printing has become increasingly advanced and scalable. Several techniques have been reported for the fabrication of organic field-effect transistors, which exhibit impressive mobility values. However, some of these techniques require additional crystallization steps. In this study, we report the fabrication of OFETs from four benchmark organic semiconductors and polystyrene. This method yields uniform and reproducible crystalline films.

How Flexible are Organic Transistors?

Flexible electronics are the future of technology. Organic transistors, or OFETs, are flexible and low-cost semiconductors made from natural substances, such as sugars. The mobility of the carriers depends on the chemistry of conjugated frameworks and intermolecular p-orbital overlaps. Organic semiconductors are typically either organic molecules, oligomers, or conjugated polymers. Oligomers have inferior electrical characteristics and are difficult to process. However, conjugated polymers are relatively easy to process and have excellent flexibility. This article discusses the fundamental properties of flexible organic field-effect transistors, the technical challenges, and the potential applications for the technology.

The properties of organic transistors allow them to be fabricated in a wide variety of shapes and sizes, and are particularly versatile. For example, they can be embedded on banknotes, which can serve as the ultimate anticounterfeit technology. Another example is flexible sensors, which could be used to realize an electrically powered artificial skin. Likewise, flexible photodetectors could be implanted in the ear, which can detect and track movement. Since flexible OSITs have excellent mechanical flexibility, they can be implanted and wearable.

The performance of flexible FGTMs was demonstrated in a study by Zhou and co-workers. High carrier mobility was observed in a vertical device architecture. Additionally, the ultra-short channel length further reduced the effects of defects and ensured high operating speeds. The mechanical stability of these devices is superior to those of silicon-based floating-gate transistors and are within two orders of magnitude of the latter. So, they are a promising option for developing flexible memory systems.

Organic transistor are a good choice for flexible electronic devices. Its light weight makes them ideal for such applications. They are easily fabricated on flexible plastics, which makes them extremely flexible and lightweight. The Que display, for example, is based on a 1 million-transistor array, which replaces the silicon-on-glass array. The Que's display has a flexible plastic backing and is virtually unbreakable.

How Stable are Organic Transistors?

Various additives have been employed in the fabrication of organic transistors to improve their stability. The data in Fig. 2A demonstrates the highest stability achieved with sc-organic transistors, while the orange-dashed data shows the best stability with OTFTs. The results were consistent within an order of magnitude despite the difference in the experimental methods. The DVTH values observed by researchers in this study are also consistent with those obtained using a variety of organic semiconductor layers and different batches of devices.

In recent years, researchers have made major advances in the design of organic transistors. These devices exhibit good mechanical flexibility and are a promising candidate for flexible displays, robotic sensors, and biomedical electronic applications. One of the major challenges in the design of these devices is thermal instability. Due to their large thermal expansion coefficients and low melting temperatures, organic transistors suffer from thermal degradation. This instability is minimized by using flexible thin-film transistors that have exceptional thermal stability. These transistors are suited for biomedical sterilization processes and can be printed on various substrates, including flexible ones.

The fabricated devices were stored in uncontrolled environments for four weeks. Their temperature and humidity were recorded and their electrical properties were measured. The relative changes in mobility and threshold voltage were calculated using a model in which the gate dielectric capacitance is a function of the gate-dielectric properties. The results of the experiments showed that the electrical properties of organic transistors remain stable in ambient air and that the experimental conditions were reproducible.

Video: What are Organic Field-Effect Transistors?