The advantages of using Crystalline silicon (c-Si) substrates includes having lower absorption in the visible range .

The metasurface is fabricated on a commercially available 230 nm thick c-Si (100) epitaxially grown on a sapphire substrate (from UniversityWafer, Inc.)

Researchers have used the following wafer for their hologram research.

What is Crystalline Silicon (C-Si)?

C-Si is a silicon cell. It is an excellent alternative to conventional solar cells. It is also highly efficient, but costs a little more. In order to make a good solar panel, it should be sized properly and should be efficient. Several factors affect the efficiency of a solar cell. The first factor is the size of the panel. The larger the panel, the more energy it can produce. A smaller panel can be more expensive than a larger one, but can be more efficient.

Monocrystalline silicon is the most common form of PV materials, and it has many advantages over its 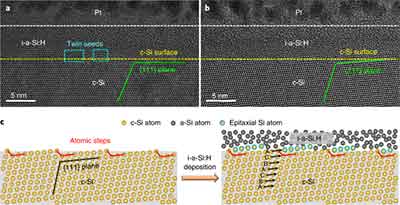 amorphous counterpart. Its light weight and easy fabrication make it a very useful material for solar panels. In addition, it is amenable to improvements in capex processes. As a result, its efficiency is increasing all the time. This makes it an excellent material for rooftop solar panels, and it is also the most expensive.

There are two types of silicon: a-Si and c-Si. While monocrystalline silicon has more efficiency than a-Si, both are used in photovoltaic technology. In photovoltaic systems, crystalline silicon is used to create solar cells. Solar panels are assembled into solar panels. There are several advantages of both types of materials. If you are wondering which one is right for your project, keep reading! You'll soon find out!

Despite the similarities in structure, both crystalline and allotropic silicon have their own distinct benefits. They are both light weight, easy to fabricate, and amenable to capex processes. They also both have high efficiencies that make them reliable and cost-effective. The applications for both materials continue to grow. If you are wondering, "What is c-Si? ", you've come to the right place.

A-Si is the oldest thin-film technology. This technology involves chemical vapor deposition (CVD) to place a thin layer of silicon on a substrate. This type of silicon absorbs a wide range of light and performs well even in low light, but a-Si is not as efficient as c-Si, and it isn't recommended for portable solar applications.

Nanocrystalline silicon is a form of silicon. It is allotropic, and it is the most common type of amorphous silicon. In contrast, polycrystalline silicon contains tiny crystalline-silicon grains that are separated by grain boundaries. It is best used for applications that require fine-grained components. However, this type of silicon is a good choice for applications that require a narrow grain-size.

CIS solar cells can be combined in tandem solar cells. The difference between them is that the former has better stability and resistance to shading. The latter is more efficient than amorphous silicon, and is therefore a good alternative for residential and commercial solar applications. The amorphous and protocrystalline silicon solar cell are best for short-wavelength light. Long-wavelength light is absorbed by the amorphous silicon substrate.

South Korean scientists have developed a sustainable process to recover silicon wafers from old solar cells and build new solar cells from the recovered silicon. Traditionally, multicrystalline silicon solar cells are made from square silicon substrates, which are cut from ingots cast in quartz crucibles. [Sources: 3, 6]

The use of Si-110 wafers would allow surface splitting and the production of high-efficiency solar cells. The advantage of this preferred embodiment is that the wafer itself can be used as an alternative to existing silicon wafer manufacturing plants built to process large silicon wafers. PhotonExport supplies small quantities of silicon crystals and waves, as described below, as well as for the production of photovoltaic cells. [Sources: 0, 1]

Si-110 wafers and is available directly from our inventory and for the production of photovoltaic cells and other applications. Si - 110 wafers, but it is also available from inventory through a variety of other sources, such as the U.S. Department of Energy. [Sources: 5]

We select high quality and inexpensive items from the above listed sources, as well as from other sources, such as the U.S. Department of Energy and other manufacturers. Si - 110 wafers from our inventory or from one of the high quality, cheaper items we select from the above. SI-110 wafers from a variety of sources and manufacturers, rather than from the inside out, choosing quality or cheaper products. [Sources: 4]

The company has a long and well-established history of manufacturing high-quality silicon wafers for use in solar cells and has long-term, reliable and reliable manufacturing facilities. The production of silicon wafers is a complex process and the specialty of UniversityWafer, Inc. is to ensure that the highest quality product is delivered to the customer. The film, hereinafter referred to as SiO2, is grown from evaporated silicon and the impurities that diffuse from silicon to the wafers during evaporation and electrodeposition are monitored during the chipping of the wafer, especially in the case of silicon-based solar cell production, as they can affect the mechanical and optical properties

UniversityWafer, Inc. is a leading supplier of high-quality silicon wafers for the solar cell industry and Tier 1 silicon dedicated to supporting large and small users of silicon products. [Sources: 5]

P-type silicon wafers, which are doped with boron, are suitable for use in solar cells and other high-performance solar cell applications. Silicon wafer suppliers are iso-silicon, silicon c-Si and silicon b-Si, and you can also choose from laser scribing. They have a variety of different standards, including high performance, low cost, high quality and high efficiency, but they all offer the same quality of silicon and high performance for the solar industry. [Sources: 5]

We understand the silicon wafer market by identifying the different sub-segments and different types of silicon b-Si wafers that are offered for sale. [Sources: 4]